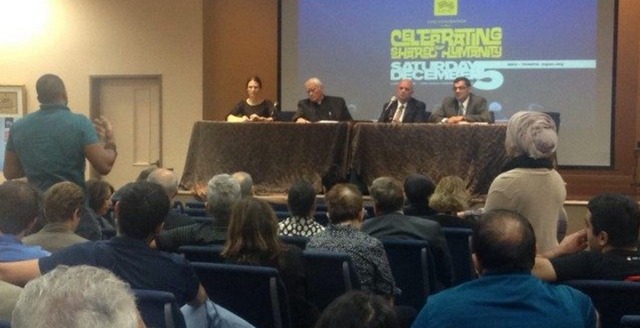 What a Mormon Bishop, a Jewish Rabbi & a Catholic Reverend Can Teach Us About Muslims Today

MR says: It's encouraging to see interfaith groups joining together to keep recent attacks and Islamic terrorism from causing more damage by creating hatred and fear.

A Republican Mormon bishop, a liberal Jewish rabbi and a Catholic reverend discussed the challenges each of their religions faced historically in an attempt to draw parallels between their own experiences and the struggles members of the American Muslim community are facing today as a result of radical Islamic terrorism.

“We are hear to learn from the Mormon experience, the Catholic experience and the Jewish experience in combating xenophobia,” Salam Al-Marayati, president of MPAC and event moderator, told the diverse crowd that had gathered in the Iman Cultural Center. He continued, “Islamaphobia is not a Muslim problem. It’s an American problem.”

Read the rest of this story at breitbart.com