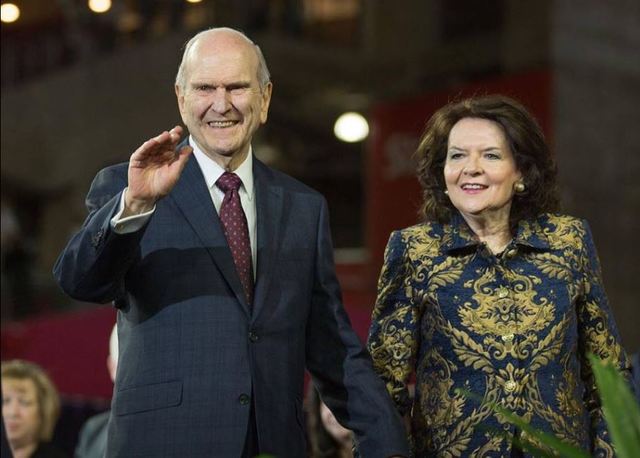 An estimated 68,000 people gathered in an NFL stadium on February 10—not to watch football players go head-to-head in an adrenaline-pumping game but to listen to a 94-year-old prophet of God speak. About this gathering, which is believed to be the largest Latter-day Saint gathering in Arizona's history, Arizona Central's BrieAnna J. Frank and Mackenzie Shuman wrote, "The leader of [T]he Church of Jesus Christ of Latter-day Saints on Sunday reminded a massive gathering of church members in Glendale to follow the covenants to unlock God's promises and reminded them about the important role that church members will play in preparing for the second coming of Jesus Christ."

After sharing the ministry, hope, and humanitarian work our prophet has done around the world this past year, Frank and Shuman share the excitement local Latter-day Saints experienced hearing a prophet of God.

"It’s kind of like going to Disneyland,” Nachelle Sampson told Arizona Central. “It’s, like, this is a man who’s very close to God and he’s here to speak to the people of Arizona and give us direction and revelation. It’s a great feeling."

"A quietness fell over the stadium at around 5:45 p.m. and congregants stood in silence as Nelson entered the venue," Frank and Shuman noted. But the prophet began his speech with an unexpected dose of humor, noting that "as the one on our high school football team who sat on the bench during most games, I must say this is an amazing sight — to be with you in a football stadium filled to the rafters."

"Nelson then delved into a story about he and his wife, Wendy, visiting one of her young cousins two weeks ago. The cousin, whom he gave the pseudonym 'Robert,' is a Brigham Young University student who had just returned from a mission trip when he had a skiing accident that left him with a fractured spine, split sternum, broken ribs and no feeling in his legs.

"Nelson said family and friends fasted and prayed that God would heal Robert from his wounds, but said that they found comfort in knowing that 'Robert is of Abraham.' . . .

"Nelson said God’s 'miracle' of giving Abraham and Sarah a son, Isaac, even though they were considered too old to have children, could comfort Robert’s family as they prayed for a miracle with Robert’s recovery. He cited numerous other of God’s miracles to Abraham, and stated that so long as followers are true to their covenants, they would 'have access to the power of God to do the seemingly impossible in our lives.'"

"Last night I was pleased with the opportunity to speak with tens of thousands of followers of Jesus Christ in Arizona. As the one on our high school football team who sat on the bench during most games, I must say this was an amazing sight—to be with fellow disciples in a football stadium filled to the rafters.

"I shared with them that the Book of Mormon is a gift from God to the entire world! It was written by ancient prophets for us who live in these latter days. It is the only book that the Lord Himself has testified to be true.

"The Book of Mormon teaches us about the remarkable promises God made long ago that can bless each of us in our day and continue to bless us throughout all time. Yes, these promises are available to you!

"The more I study the Book of Mormon, the more I marvel at the miracle it is—how it was translated by the gift and power of God. Its central message is that Jesus Christ is the Savior of the world. It has converting power. Its truths draw every earnest seeker closer to God and fill each with a desire to know more about the restored gospel of Jesus Christ."