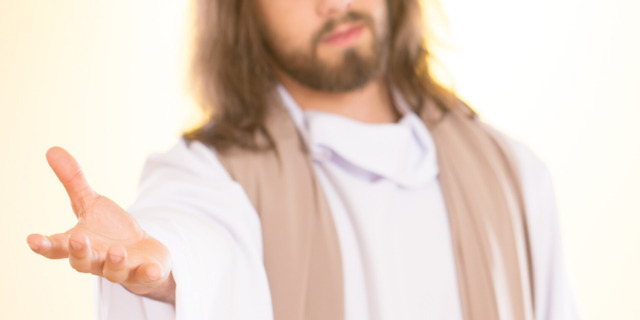 In the New Testament, the resurrected Jesus appeared to many people, including Mary Magdalene, the women who came to the tomb, the Twelve, the disciples, and, according to Paul, “above five hundred brethren” (1 Corinthians 15:6), as well as, of course, to Paul himself on the road to Damascus.

Fired by their personal experience, these witnesses fearlessly took Christ’s message to the world, enduring every kind of persecution imaginable. I love to read the New Testament and see the impact of Christ’s Resurrection on those who witnessed it!

In another hemisphere, the resurrected Jesus appeared to a large multitude of 2,500. Every single eye was upon him. We presume he could have simply stood in front of that large audience and given a life-changing sermon, and that would have been powerful enough! But it wasn’t enough. Jesus invited the entire multitude, “one by one,” not only to hear with their ears and see with their eyes but to feel in an intimate way. He said:

It’s one thing to shake someone’s hand and to feel your flesh touching theirs, but imagine being invited to touch someone’s wounds. That is an intensely personal experience—an intensely sacred experience, in this case.

Jesus, on that day, created 2,500 sure witnesses of his Resurrection. This emotional and powerful procession must have taken several hours. If each individual in the multitude had taken fifteen seconds to feel the Savior’s hands, feet, and side, it would have taken ten hours. (That is one line we would be happy to wait in all day long.)

Imagine the impact of 2,500 sure witnesses of Christ who not only heard his words but touched his hands and felt his wounds. They completely transformed Nephite society for hundreds of years.

In fact, the book of 4 Nephi, immediately following Jesus’s appearance, covers a span of nearly 300 years, yet it is only one chapter! Why is it so short? Nothing to report. The people kept the commandments and they prospered in the land, as promised.

It was in the third generation after Christ that things began to disintegrate. My personal opinion is that the generation who went forth “one by one” to become personal witnesses of Christ were growing old and passing away, and the power of their testimonies went with them, to some extent.

I have no memory at all of my great-grandparents. But I remember my grandparents, a couple of generations away. If they had looked me in the eye and told me, “I was there, I saw him, I felt his hands and his feet, and I know he lives,” I would never, ever forget it. But that generation, the grandparents in 4 Nephi, eventually died out, and when the witnesses of Christ were gone, the society began to go downhill.

Yes, the Book of Mormon is not only a second witness of Christ as a book but a record of thousands of witnesses of Christ, and a witness of what their testimonies did for society. I would love to live in the place described in early 4 Nephi among all those witnesses of Christ. “Surely there could not be a happier people among all the people who had been created by the hand of God” (4 Nephi 1:16).

Four times in 4 Nephi, Mormon mentions that there was “no contention,” as if he simply cannot believe it. Perhaps some readers have thought, “Maybe there weren’t any in-laws back then.” As if to prevent such speculation, Mormon says, “And they were married, and given in marriage” (4 Nephi 1:11), and yet, “there was no contention among all the people” (4 Nephi 1:13).

How did they do it? The answer, I believe, lies in 4 Nephi 1:15: “There was no contention in the land, because of the love of God which did dwell in the hearts of the people.” When those 2,500 souls went forth to feel the wound in his side and to touch his hands and feet, they most certainly felt his love—his perfect, consuming, divine love—and “the love of God” stayed with them and changed them forever.

Jesus taught, “Greater love hath no man than this, that a man lay down his life for his friends” (John 15:13). This most fortunate multitude actually felt Jesus’s hands, literally holding in their own hands the physical evidence that he had lain down his life for them.

One of the wonderful things about scripture study is that we may vicariously feel what those in the scriptures felt. As we read the Book of Mormon, this reservoir of golden answers that is, above all else, Another Testament of Jesus Christ, we get to stand in line with the 2,500. And when we approach our study with prayerful, grateful hearts, we may feel His love as well.

This love of God will sustain us in this challenging world and give us hope and courage to press on until the promised day when Jesus will come again. On that most glorious occasion, it is my belief that we too will be invited to feel the wound in his side, and to feel his hands and feet and, without question, his overwhelming love—not vicariously, and not as part of a group or multitude, but in person, one by one.