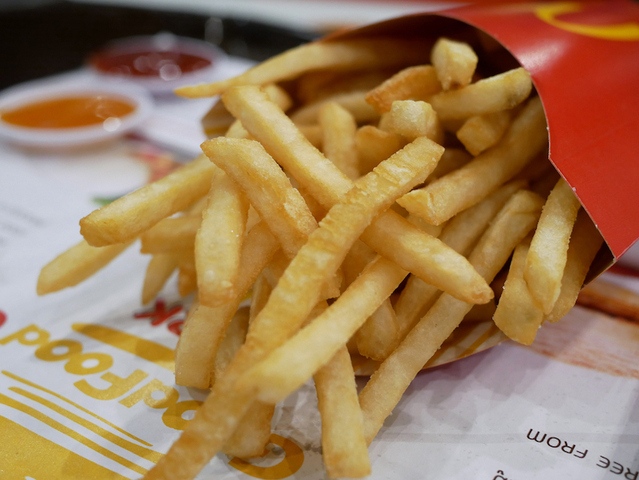 It was a moment that didn’t seem to be anything out of the ordinary—just some teenaged boys hanging out on a summer afternoon, stopping at McDonalds for lunch. But for Christian Butler, that one afternoon turned out to be something he likely won’t ever forget.

In an Instagram post shared over the weekend, Christian’s father, David Butler, shared why the moment was so memorable. According to Butler, who is the co-host of Don’t Miss This, his son was hanging out with some friends at City Creek in downtown Salt Lake City when a “nice old man” ordered food behind him in line. The two started talking about what the other was getting to eat.

“When their bags came, Christian said to him, ‘If you want to eat with us, we are just sitting over there,’” Butler wrote. “When I asked [Christian] about it, he said, ‘I just figured he was some nice old lonely man. Thought he might want some company.’”

So the man joined Christian and they shared fries until he explained that his family was at a nearby table and thanked him for the conversation.

“When he walked away, one of Christian’s friends said, ‘I think I know him. I think that man talks in conference.’”

After googling his name, they discovered that the man they were speaking to was President Dallin H. Oaks. And Christian had no idea.

► You may also like: ‘We wanted to be with Dad’: President Oaks’s family shares insights about their father

“Some may think he needs to pay more attention in church, but I think he got the message just fine,” Butler wrote. “Only wish I had a picture—one of a world I yearn to live in of two strangers trying to make each other’s days, completely unaware but absolutely winning.”

Butler shared that he had “a grin in my soul” as he reflected on the story and kept thinking of Paul’s words in Hebrews 13:1, which reads, “Let brotherly love continue.” He followed that up with verse 2, which says, “Be not forgetful to entertain strangers: for thereby some have entertained angels unawares.”

Dallin H. Oaks may not have seemed the likeliest choice to become an Apostle. His life path had been anything but conventional. He was only 7 when his mother became a widow. His young adulthood saw him joining the National Guard and marrying at age 19. But all along that path, the Lord was preparing him for the call that would eventually come.

In the Hands of the Lord by noted historian Richard E. Turley Jr. takes the reader on a fascinating journey through the life of an extraordinary leader. It is filled with stories and photographs detailing his boyhood, his family life, his education and military experiences, and his distinguished academic and law career.