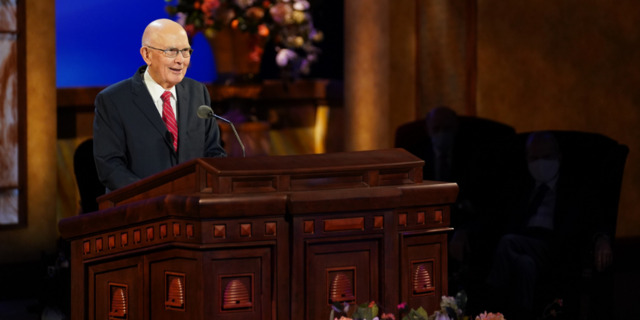 It’s not unusual for a talk by President Dallin H. Oaks to spark conversation. His talk from the April 2021 general conference “Defending Our Divinely Inspired Constitution” is no exception.

In an opinion piece for Deseret News, writer Christian Sagers shared he was surprised at first when President Oaks introduced his topic after the Sunday morning session had emphasized the worldwide nature of the faith:

Dedicating an address to tenets of the US Constitution left me with a sense of anticipation—how does this apply to a global church audience? As I listened, I understood the brilliance of it: The universality of the Constitution’s principles similarly transcend cultures and partisanship for the “rights and protection of all flesh,” as the scriptures put it.

Sagers describes how the five principles taught by President Oaks are needed, both for ourselves and the world. Read the full piece at Deseret News.

Ryan Taber, national co-chair of Latter-day Saint Democrats of America told Deseret News, “I appreciate President Oaks’s teachings, especially about the importance of the rule of law, being loyal to principles rather than personalities, and citizens having a voice. I also appreciate his reminders that we as Latter-day Saints are going to come to different conclusions on which candidate and which party to support in any given election.”

► You may also like: President Oaks has a distinct general conference talk style. Here’s who may have influenced that

Others interviewed by Walch include Richard E. Turley Jr., author of President Oaks’s new biography, and Judge Thomas B. Griffith, who was recently appointed by President Joe Biden to the Presidential Commission of the Supreme Court.