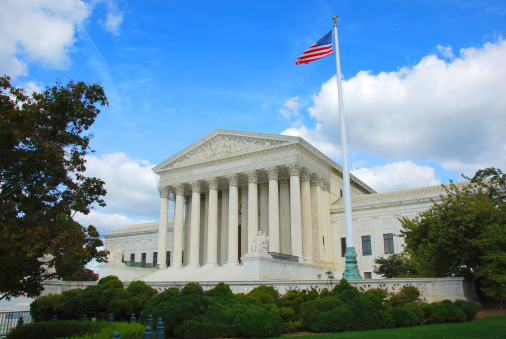 What the Supreme Court's Decision Means for Same-Sex Marriage

For the last several months, the topic of same-sex marriage has been in the forefront for several states and religious groups. As far back as February, the Church has been submitting joint amicus briefs with other religious organizations to appeal against the legalization of same-sex marriage. And despite the Supreme Court's decision to pause same-sex marriage in Utah earlier this year after an initial court ruling, today the Court made an even more monumental decision: not to rule. Several news sites have been reporting not only on the decision, but on the implications it will have for many.

Deseret News reports that "It was widely expected that court would take up at least one gay marriage case in its term that started Monday," but that instead, "In a surprising move, the high court denied seven petitions from Utah, Oklahoma, Indiana, Virginia and Wisconsin. Each of those states argued their cases were the best vehicles for the justices to decide the same-sex marriage question once and for all."

Additionally, Forbes describes some of the immediate implications of this decision:

“What many may not, however, realize is that SCOTUS’ refusal to review the matter will likely result in ending the same-sex marriage ban in more than the five states that had sought a decision from the highest court.

With the 4th, 7th and 10th circuit Courts of Appeal having ruled that the bans are illegal, and these rulings now being the law in these circuits, legal challenges to gay marriage bans in the remaining states within these federal jurisdictions will have the advantage of having the law on their side."

NPR also highlighted some of the biggest impacts and speculations on their station this morning:
"There are 12 states that do not have gay marriage now, that will now get it. Utah, Oklahoma, Kansas, Colorado, Wyoming, North Carolina, South Carolina, Virginia, West Virginia, Indiana & Wisconsin.
"It is conceivable that later this year, some other appeals court will say bans on gay marriage are legal and that case will then get appealed to the Supreme Court by the … gay marriage advocates.
"It's conceivable the Court would take that case because then there would be a conflict int he circuits and that's what the Supreme Court most often does is resolve conflicts in the circuit.
"But I really can't imagine that the Court would be letting tens of thousands of people get married and then sort of say 'just kidding.'
"This will drive up the numbers of states that now will have gay marriage, and pretty soon it'll be the majority of the states. Then, when it comes to the Supreme Court again… the Court will say 'well, the  majority of the country has gay marriage and the world hasn't come to an end.'"
Listen to the entire report below.

The Washington Post added to the conversation with an interactive graphic, describing details of the topic for each individual state.

The Church responded to the Supreme Court's announcement by stating that the decision "will have no effect on the doctrinal position or practices of The Church of Jesus Christ of Latter-day Saints." The response also stated, "Respectful coexistence is possible with those with differing values." Read the full response here.