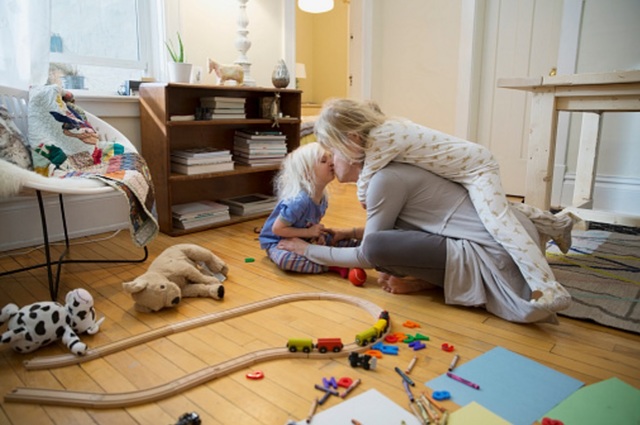 When Mother's Day Is Hard: A 40-Year-Old Single Woman's Thoughts

"I worry some of us treat Mother’s Day as a litmus test to measure our value as a woman. It is a judgment day of sorts where we hold ourselves to a standard that is hard to articulate or agree upon."

There was a time in my life when I wanted to be an actress. So when the sixth grade play rolled around, I eagerly auditioned and sure enough, I was cast in a speaking role. The play was an old-fashioned melodrama and the lead was a young damsel in distress type who in the course of the play was tied to some railroad tracks by a dastardly villain and saved by a dashing hero. And I wanted to be her. Bad.

However, perhaps due to my mature presence (or maybe just because I was the tallest girl who auditioned), the lead role was not to be mine and instead I was cast as the hero’s rich and insufferable mother. (Don’t feel too bad for me—I did wear a pretty great costume.)

I tried out for another play in seventh grade. It was a play where 90 percent of the characters were children. My role? Mother #4.

Eighth grade was going to be my shot. The play revolved around a family with four daughters. FOUR DAUGHTERS. My odds of finally achieving ingénue status were not going to get any higher than this. When the cast list was posted, I was thrilled to see my name in second position. Heart pumping, I moved my eyes to the left to see which daughter I would play and read what I should have been expecting all along . . . Mrs. Smith, their mother. I retired from acting shortly thereafter.

Both in acting and in real life, we are sometimes given roles we don’t want and other times the role we are given does not turn out the way we anticipated. Ironically, the disdain I felt only being seen as the mother in acting roles did not translate to my real life. The reality is I always wanted to be a mother. It never occurred to me that I wouldn’t be one.

Motherhood Isn’t the Same for Everyone

Motherhood is one of those tricky, very personal roles that is impossible to define in a way that feels true to everyone. Some women can’t have children—either due to circumstance or physical limitations. Some women choose big families and deal with judgmental head shakes when wrangling kids in the grocery store. Some women don’t have children and get asked evasive questions around why.

I know women who rejoice in every element of mothering and others whose sense of self feels swallowed up in the day-to-day realities of caretaking. We have stay-at-home moms, working moms, single moms, and step moms (we even have auntie moms, which is a term my niece and I made up and I am pretending is a thing).

We all know and love many types of moms and yet, if my Facebook feed is anything to go by, Mother’s Day is hard for some of us. And I get it—I have felt it. We have a day set apart to celebrate something that we all define and experience differently. Instead of celebrating everything we have accomplished, it sometimes feels like a reminder of everything we didn’t.

I have a good friend who chooses to stay home from church on Mother’s Day. She is a mother to three interesting and kind children who love her dearly, but hearing tales of other people’s “perfect” mothers makes her feel bad.

For me, the day itself is mostly fine. I enjoy attending church and hearing the messages given. But there is one part of Mother’s Day at church that I dread—the handing out of ward Mother’s Day gifts. In every ward I have attended as an adult, the ward hands out a small gift to all the women in the ward. Now the gifts are supposed to be for all adult women but it is still called a “Mother’s Day gift” and youth-aged kids hand them out, so confusion is bound to ensue.

Nothing makes me feel more conspicuous than at the end of the meeting when the bishop asks all the women to stand up so we can be identified. This is one of those times where I can’t win. If I stay seated, some well-meaning woman will say, “stand up, this is for all of us.” But standing feels wrong too. And even though no one is thinking it, I feel like a fraud. And it makes me sad.

I have tried avoiding it. Usually, I get up immediately after the closing prayer and book it out of there before it becomes an issue. There was one year when the gift was a little box of chocolate, and so I decided maybe it was time to put aside my uncomfortable feelings and just accept the gift. Of course, that was the time when the kid handing it out—a 14-year-old boy (who knew I wasn’t a mother)—looked at me with confusion and in his ignorance, hesitated. “Just give me the chocolate,” I said and quickly went home.

I worry some of us treat Mother’s Day as a litmus test to measure our value as a woman. It is a judgement day of sorts where we hold ourselves to a standard that is hard to articulate or agree upon. In this scenario, we all lose. I know there are women who don’t feel a discord between who you are and who you wish you could be. But we all know women and mothers who feel marginalized, lonely, or unworthy. The point is we have to be kinder—to each other yes, but also to ourselves. How do we celebrate our wins without getting mired in our losses?

One of the greatest joys of my life is being an aunt to seven “perfect” kids. I love them fiercely. They feel as much mine as if they came from my body. I get to parent them in a way that is different from their actual parents but no less beautiful. On this Mother’s Day, I am choosing to celebrate the joy I have found in a role I wouldn’t have chosen. I celebrate all women—in whatever circumstance you find yourself—for your efforts and achievements and for your heart.