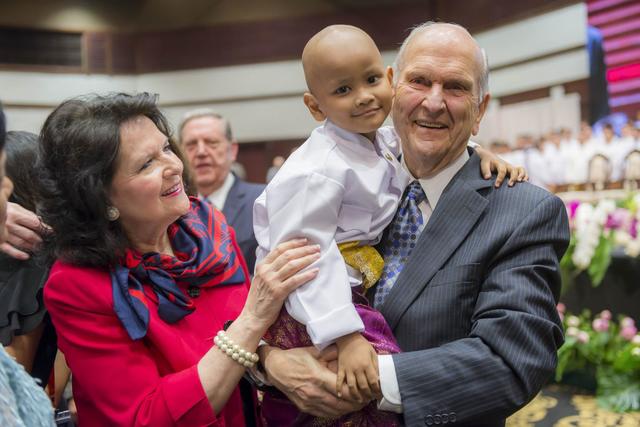 Recently, President Russell M. Nelson released a statement urging Latter-day Saints to be more conscientious of how we refer to the Lord's Church. "The Lord has impressed upon my mind the importance of the name He has revealed for His Church, even The Church of Jesus Christ of Latter-day Saints. We have work before us to bring ourselves in harmony with His will," he said.

In conjunction with this statement, the Church released new guidelines encouraging Latter-day Saints and media outlets to refrain from using "Mormonism," "Mormon Church," "LDS Church," and the word "Mormon" in most contexts. This shift will place more focus on the very heart of our Church, the Savior Jesus Christ. Each part of the name of The Church of Jesus Christ of Latter-day Saints is divinely inspired. In a general conference talk given in 1990, President Nelson, then-Elder Nelson, broke down the name of the Church, revealing the importance of each word in its official title. Here are some highlights from that talk to give us insight into why this name is so significant.

Before any other name is considered to be a legitimate substitute, the thoughtful person might reverently consider the feelings of the Heavenly Parent who bestowed that name.

Surely every word that proceeds from the mouth of the Lord is precious. So each word in this name must be important—divinely designated for a reason. If we study the key words in that name, we can better understand the name’s full significance.

The last word in the title is Saints. I smile when I remember a comment made after my call to the Quorum of the Twelve. A doctor friend relayed a report made at a professional meeting that “Dr. Nelson was no longer practicing cardiac surgery because his church had made him ‘a saint.’”

Such a comment was not only amusing but revealing. It evidenced unfamiliarity with the language of the Bible, in which the word saint is used much more frequently than is the term Christian.

Despite its use in ninety-eight verses of the Bible, the term saint is still not well understood. Some mistakenly think that it implies beatification or perfection. Not so! A saint is a believer in Christ and knows of His perfect love. . . .

The term latter-day is an expression especially difficult for translators who labor in languages in which there is not a good equivalent term. Some translations may suggest last day.

It is true that scriptures foretell the final days of the earth’s temporal existence as a telestial sphere. The earth will then be renewed and receive its paradisiacal, or terrestrial, glory. (See A of F 1:10.) Ultimately, the earth will become celestialized. (See Rev. 21:1; D&C 77:1; D&C 88:25–26.) But its last days must be preceded by its latter days!

We live in those latter days, and they are really remarkable. The Lord’s Spirit is being poured out upon all inhabitants of the earth, precisely as the Prophet Joel foretold. . . .

We worship God the Eternal Father in the name of His Son by the power of the Holy Ghost. We know the premortal Jesus to be Jehovah, God of the Old Testament. We know Him to be “the chief corner stone” upon which the organization of His Church is based. (Eph. 2:20.) We know Him to be the Rock from whom revelation comes to His authorized agents (see 1 Cor. 10:4; Hel. 5:12) and to all who worthily seek Him (see D&C 88:63).

We know that He came into the world to do the will of His Father, who sent Him. (See 3 Ne. 27:13.) His divine mission was to effect the Atonement, which was to break the bands of death and enable us to receive immortality and eternal life.

We revere the name of Jesus Christ. He is our risen Redeemer.

The first two words of the name the Lord chose for His earthly organization are The Church.

Note that the article The begins with a capital letter. This is an important part of the title, for the Church is the official organization of baptized believers who have taken upon themselves the name of Christ. (See D&C 10:67–69; D&C 18:21–25.)

The foundation of the Church is the reality that God is our Father and that His Only Begotten Son, Jesus Christ, is the Savior of the world. The witness and inspiration of the Holy Ghost confirm those realities.

The Church is the way by which the Master accomplishes His work and bestows His glory. Its ordinances and related covenants are the crowning rewards of our membership.