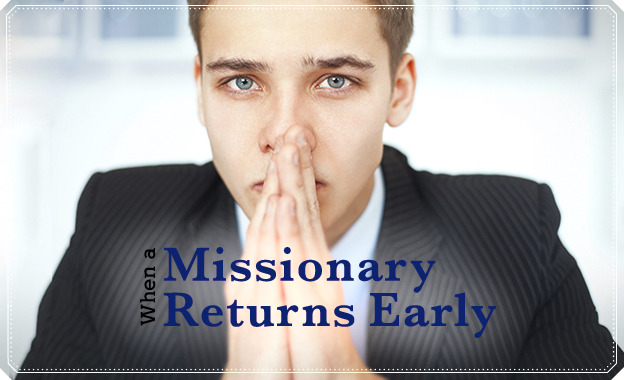 When a Missionary Returns Early

It is the mark of a job well done, of two years of sacrifice devoted to God and others. Homecoming for a returned missionary should be a time for family gathering, congratulations, and reflection. For me, it was quite different—depression and bipolar disorder sent me home before my 10th month was up.

That doesn’t stop others from treating me like I am somehow less than I should be. For thousands of missionaries who come home early—whether due to rule infractions, health issues, or emotional struggles—much of the trauma lies in the treatment given by well-intentioned friends and neighbors.

After returning from 10 months of service, I received several letters and comments from friends and acquaintances urging me to “not give up” and “go back.” While generally understanding, the expectations set by others crushed my spirit. I wanted to go back. I loved my mission. I hoped and prayed that, above all else, I could get better and return to the field. And yet I knew that I would not return. I knew I was in over my head. The good-natured but misguided pressure to “just cheer up” hurt deeply.

I learned quickly to keep my mouth shut. At college, the few people who bothered to pursue the subject of my age would not accept “20” as a legitimate answer. Some accused me of being dishonest. Those who didn’t would likely ask, “How can you be home from a mission? Did you even go? What did you do to get sent home?” The worst part? I was still trying to sort out those feelings myself.

I recognize that much of the hurt I felt was unintended, or a result of inexperience with this issue. So, in an effort to educate, here are some tips on how to approach an early release missionary—whatever the cause of release—from someone who has lived the disaster.

1. Recognize how traumatic the experience is for the person coming home.

Many early release missionaries feel loss, nostalgia, or longing to be back in the field. Coming home brings both relief and sorrow. It’s akin to graduating from high school and leaving good friends behind. The conflicting emotions are difficult to deal with.

The thought of “What if?” or “What might have been?” is a constant nag, so allow your missionary to work through his or her feelings. It’s ok for them to be sad. It may take months for the wounds to begin to heal. But given time, they will. Let us grieve. In the meantime, supportive friends and neighbors should say, “We love you and you’re worth so much to us,” not, “You don’t have to be sad.” Many of us need to work through our grief to heal. Simply show love to us while we do it.

2. Don’t search for something to say.

You don’t need profound words of encouragement or a prepared speech to address an early release missionary. I recall many moments of pause, confusion, and stammering when I explained that I came home early. What early release missionaries do not need to hear is “sorry.” We want to know that our sacrifice mattered. We want to know that, whether our service lasted 24 months or two, we are still people in your eyes. For me, an arm around my shoulder, a “Welcome home, Elder,” and a warm smile are all I ever wanted coming home. That’s all you have to do.

It may be too painful right after the return, or perhaps it is simply too much of an effort to explain the conditions of the release. I felt that no matter what I would say, my parents and friends would not understand what I was going through. I was largely right. Unless someone has had a similar experience, it is difficult to connect. Don’t feel shunned or unloved if your son or daughter or friend doesn’t share the dark days of his or her mission with you. Encourage conversation when you can, listen intently to understand, be sure they have someone to talk to, but don’t put blame or guilt on early release missionaries for not being “open” about their issues. They have enough on their plate already.

Pep talks and cheering up strategies didn’t work well for me. What helped me most in the awkward transition was moving on with life. Going to school, dating, and working all helped me put the nightmares in the past. Now, six months after the fact, I can look back and reflect with clearer vision.

4. Treat early return missionaries like everyone else, and not as if their situation makes them some kind of an anomaly.

Ask them about their future goals and dreams. Talk about old hobbies they might pick up again. Get reacquainted with your missionary. It is not necessary to discuss his or her difficulties in the mission field in order to reconnect.

I consider myself exceptionally lucky. I came home to a warm ward, understanding family, and dependable friends. I may have felt alone and inferior at college due to the reactions of some ignorant people, but I do not regret the decision to come home. I served God when He asked, and I earned an honorable release. Every early release missionary should be proud of his or her contribution and willing heart.

I was told an analogy that has struck me inside again and again. In the military, the view of completing missions and of wounded comrades is quite different from our view of similar situations in religious missions. If soldiers rush into battle and are wounded on their first mission or 50th mission, they are treated the same. They are given medals. They are applauded for their service, no matter how long. Their brothers and sisters at arms risk their own lives to rescue and restore those soldiers to their homes. No one looks at them differently. No one says, “Well, you didn’t really help the war effort, did you?” or “Toughen up, man. It’s just a bullet.” These brave men and women are honored and respected for their service.

So should it be with missionaries. We were willing to go where the Lord asked. Sometimes we get hurt. All we ask for is acceptance and love. We return with dread, hoping our partial offering will still be acceptable to those we care about most. My hope is that every missionary will be loved and respected. With your understanding and support, it can happen.

Advice from a Mission President

Craig M. Moffat, an allergist for Intermountain Healthcare in Utah, returned from service as the president of the Washington Seattle Mission in the summer of 2010. He has extensive experience with missionaries who return home early. Here’s what he says:

“When I call parents, the majority of them are understanding. They just want what’s best for their child. They want to know the issues and voice their concerns. Parents are most often confused as to what to do.

“The steps that have to be taken are, first, apprise the leaders and parents and second, keep communication lines open. As a mission president, I don’t have the time to work out the particulars for the missionary’s care when they get home. That is up to the parents.

“The greatest weakness in the system is the transition home. The best advice I’d say is to love the missionary. They have suffered tremendous internal torment, guilt, anger, and fear. They carry a spirit of self-incrimination, saying ‘If only this’ or ‘If only that.’ Parents will do best if they accept them with open arms. And when the time is right, sit down and talk about the issues. Don’t fluff it over.

“The problems come when parents are defensive and angry. These feelings are quickly absorbed by the missionary. They think they’re unworthy anyway. Tell them it’s okay. Get them talking. How a missionary perceives his or her mission will reflect upon how that missionary perceives him- or herself. Put aside stereotypes, don’t worry about the long-term results, and get them help.”