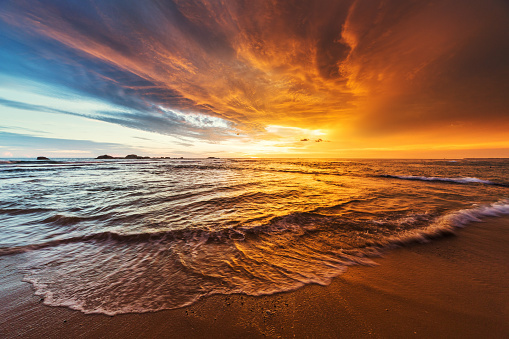 As a swimmer, I always wondered about the saying I sometimes heard from Church members: "Satan has dominion over the water."

I heard this saying a few times in reference to why missionaries are not allowed to swim or participate in water sports, but I never knew why it was used in connection with missionaries or where it came from.

As it turns out, this saying most likely originated from section 61 of the Doctrine and Covenants and the events that proceeded it. On August 12, 1831, Joseph Smith and 10 others were traveling by canoe on the Missouri river and had camped on McIlwaine’s Bend when they experienced the following:

On the 9th, in company with ten Elders, I left Independence landing for Kirtland. We started down the river in canoes, and went the first day as far as Fort Osage, where we had an excellent wild turkey for supper. Nothing very important occurred till the third day, when many of the dangers so common upon the western waters, manifested themselves; and after we had encamped upon the bank of the river, at McIlwaine’s Bend, Brother Phelps, in open vision by daylight, saw the destroyer in his most horrible power, ride upon the face of the waters; others heard the noise, but saw not the vision (History of the Church 1:202–3).

Though Elder William W. Phelps was the only one to see the vision, others "heard the noise, but saw not the vision." Joseph Smith then received the following revelation found in Doctrine and Covenants 61:4 that the group should "bear record; behold, there are many dangers upon the waters, and more especially hereafter."

Section 61:14–19 also goes into more detail about the "dangers upon the waters" and what that meant for Latter-day Saints:

14 Behold, I, the Lord, in the beginning blessed the waters; but in the last days, by the mouth of my servant John, I cursed the waters.

15 Wherefore, the days will come that no flesh shall be safe upon the waters.

16 And it shall be said in days to come that none is able to go up to the land of Zion upon the waters, but he that is upright in heart.

17 And, as I, the Lord, in the beginning cursed the land, even so in the last days have I blessed it, in its time, for the use of my saints, that they may partake the fatness thereof.

18 And now I give unto you a commandment that what I say unto one I say unto all, that you shall forewarn your brethren concerning these waters, that they come not in journeying upon them, lest their faith fail and they are caught in snares;

19 I, the Lord, have decreed, and the destroyer rideth upon the face thereof, and I revoke not the decree.

While the origin of the saying that Satan has dominion over the waters likely came from Elder Phelps' vision and section 61 of the Doctrine and Covenants, the scripture does not specifically state that Satan has dominion over this element, but that the waters are "cursed." But what does that mean and how does that apply to missionaries? The Doctrine and Covenants Student Manual Section 61 "The Lord Has Blessed the Land and Cursed the Waters," gives some commentary from Joseph Fielding Smith about what it might mean that the waters are "cursed" and what that has to do with safety.

In the beginning the Lord blessed the waters and cursed the land, but in these last days this was reversed, the land was to be blessed and the waters to be cursed. A little reflection will bear witness to the truth of this declaration. In the early millenniums of this earth’s history, men did not understand the composition of the soils, and how they needed building up when crops were taken from them. The facilities at the command of the people were primitive and limited, acreage under cultivation was limited, famines were prevalent and the luxuries which we have today were not obtainable.

Someone may rise up and say that the soil in those days was just as productive as now, and this may be the case. It is not a matter of dispute, but the manner of cultivation did not lend itself to the abundant production which we are receiving today. It matters not what the causes were, in those early days of world history there could not be the production, nor the varieties of fruits coming from the earth, and the Lord can very properly speak of this as a curse, or the lack of blessing, upon the land.

In those early periods we have every reason to believe that the torrents, floods, and the dangers upon the waters were not as great as they are today, and by no means as great as what the Lord has promised us. The early mariners among the ancients traversed the seas as they knew them in that day in comparative safety. . . . Today this manner of travel in such boats would be of the most dangerous and risky nature.

Moreover, we have seen the dangers upon the waters increase until the hearts of men failed them and only the brave, and those who were compelled to travel the seas, ventured out upon them. In regard to the Missouri-Mississippi waters, we have seen year by year great destruction upon them, and coming from them. Millions upon millions of dollars, almost annually are lost by this great stream overflowing its banks. Many have lost their lives in these floods as they sweep over the land, and even upon this apparently tranquil or sluggish stream there can arise storms that bring destruction. Verily the word of the Lord has been, and is being, fulfilled in relation to those waters. While the Lord has spoken of the sea heaving itself beyond its bounds, and the waves roaring, yet we must include the great destruction upon the waters by means of war, and especially by submarine warfare as we have learned of it in recent years (Church History and Modern Revelation, 1:224).

The requirement for missionaries not to swim or participate in water sports is under the safety section of the Missionary Handbook along with avoiding any activity that may cause injuries like horseback riding, motorcycling, or rock climbing (Missionary Handbook, 21).

But given the way the revelation was received and how early missionaries traveled frequently by water, it's easy to see how the saying became a justification for why missionaries should not swim or play water sports.

Beginning in 1947, the theme of study for the Melchizedek Priesthood Quorums was decided to have an emphasis placed on the early history of the Church with special focus upon the revelations and commandments given to the Prophet Joseph Smith. Written by Joseph Fielding Smith, this 4-volume collection covers the period of the life of the Prophet Joseph Smith.

Mormon Life Missionary WaterMissionary,Water,Mormon Life
Comments and feedback can be sent to feedback@ldsliving.com