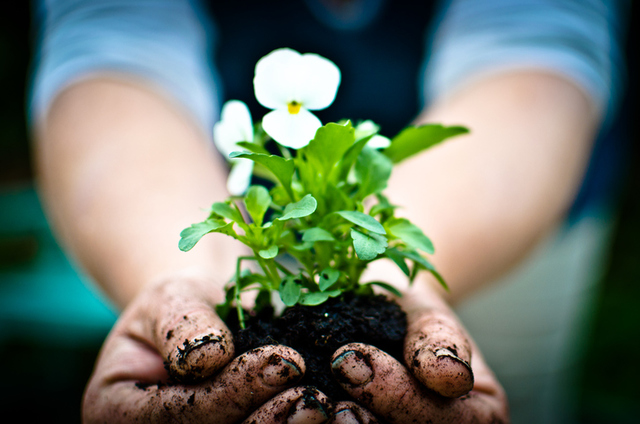 With school is back in session, there's one thing that we still need to prepare our hearts and minds for—October general conference. To help you prepare, LDS Living will feature some of the most beloved talks of all time. Every Friday in September, watch for a new talk that is sure to uplift you and help you feel the Spirit as general conference approaches.

The following is an excerpt from the talk "God Is the Gardener" by Hugh B. Brown.

Could I tell you just a quick story out of my own experience in life? Sixty-odd years ago I was on a farm in Canada. I had purchased the farm from another who had been somewhat careless in keeping it up. I went out one morning and found a currant bush that was at least six feet high. I knew that it was going all to wood. There was no sign of blossom or of fruit. I had had some experience in pruning trees before we left Salt Lake to go to Canada, as my father had a fruit farm. So I got my pruning shears and went to work on that currant bush, and I clipped it and cut it and cut it down until there was nothing left but a little clump of stumps.

And as I looked at them, I yielded to an impulse, which I often have, to talk with inanimate things and have them talk to me. It’s a ridiculous habit. It’s one I can’t overcome. As I looked at this little clump of stumps, there seemed to be a tear on each one, and I said, “What’s the matter, currant bush? What are you crying about?”

And I thought I heard that currant bush speak. It seemed to say, “How could you do this to me? I was making such wonderful growth. I was almost as large as the fruit tree and the shade tree, and now you have cut me down. And all in the garden will look upon me with contempt and pity. How could you do it? I thought you were the gardener here.”

I thought I heard that from the currant bush. I thought it so much that I answered it.

I said, “Look, little currant bush, I am the gardener here, and I know what I want you to be. If I let you go the way you want to go, you will never amount to anything. But someday, when you are laden with fruit, you are going to think back and say, ‘Thank you, Mr. Gardener, for cutting me down, for loving me enough to hurt me.’”

Ten years passed, and I found myself in Europe. I had made some progress in the First World War in the Canadian army. In fact, I was a field officer, and there was only one man between me and the rank of general, which I had cherished in my heart for years. Then he became a casualty. And the day after, I received a telegram from London from General Turner, who was in charge of all Canadian officers. The telegram said, “Be in my office tomorrow morning at ten o’clock.”

I puffed up. I called my special servant. (We called them “batmen” over there.) I said, “Polish my boots and my buttons. Make me look like a general, because I am going up tomorrow to be appointed.”

He did the best he could with what he had to work on, and I went to London. I walked into the office of the general. I saluted him smartly, and he replied to my salute as higher officers usually do to juniors—sort of a “Get out of the way, worm.” Then he said, “Sit down, Brown.”

Just then he went into the other room to answer a phone call, and I did what most every officer and man in the army would do under those circumstances: I looked over on his desk to see what my personal history sheet showed. And I saw written on the bottom of that history sheet in large capital letters: “THIS MAN IS A MORMON.”

Now at that time we were hated heartily in Britain, and I knew why he couldn’t make the appointment. Finally he came back and said, “That’s all, Brown.”

I saluted him, less heartily than before, and went out. On my way back to Shorncliffe, 120 kilometers away, I thought every turn of the wheels that clacked across the rails was saying, “You’re a failure. You must go home and be called a coward by those who do not understand.”

And bitterness rose in my heart until I arrived, finally, in my tent, and I rather vigorously threw my cap on the cot, together with my Sam Browne belt. I clenched my fist, and I shook it at heaven, and I said, “How could you do this to me, God? I’ve done everything that I knew how to do to uphold the standards of the Church. I was making such wonderful growth, and now you’ve cut me down. How could you do it?”

And then I heard a voice. It sounded like my own voice, and the voice said, “I am the gardener here. I know what I want you to be. If I let you go the way you want to go, you will never amount to anything. And someday, when you are ripened in life, you are going to shout back across the time and say, ‘Thank you, Mr. Gardener, for cutting me down, for loving me enough to hurt me.’”

Those words—which I recognize now as my words to the currant bush and that had become God’s word to me—drove me to my knees, where I prayed for forgiveness for my arrogance and my ambition.

As I was praying there, I heard some Mormon boys in an adjoining tent singing the closing number to an M.I.A. session, which I usually attended with them. And I recognized these words, which all of you have memorized:

It may not be on the mountain height
Or over the stormy sea;
It may not be at the battle’s front
My Lord will have need of me;
But if, by a still, small voice he calls
To paths that I do not know,
I’ll answer, dear Lord, with my hand in thine:
I’ll go where you want me to go.
. . .
So trusting my all to thy tender care,
And knowing thou lovest me,
I’ll do thy will with a heart sincere;
I’ll be what you want me to be.
[“It May Not Be on the Mountain Height,” Hymns,1948, no. 75]

My young friends and brothers and sisters, will you remember that little experience that changed my whole life? Had the Gardener not taken control and done for me what was best for me, or if I had gone the way I wanted to go, I would have returned to Canada as a senior commanding officer of western Canada. I would have raised my family in a barracks. My six daughters would have had little chance to marry in the Church. I myself would probably have gone down and down. I do not know what might have happened, but this I know, and this I say to you and to Him in your presence, looking back over sixty years: “Thank you, Mr. Gardener, for cutting me down.”

Now I leave with you with my testimony, and I received this testimony from the same source that Jesus said inspired Peter when he said, “Thou art the Christ.”

Whatever undertakings may demand of you and of your attention, I tell you, young men and young women, you cannot make a better resolution today than this: “I am going to keep close to the Lord. I am going to understand Him better, and, understanding Him, I will understand myself and will try to put my life into harmony with His.” For I have come to know that every man and every woman has potential godhood dwelling in him, for God is in reality the Father of us all.

Want more inspiring talks? Be sure to check out the Best Loved Talks of the LDS People ebook available at deseretbook.com.