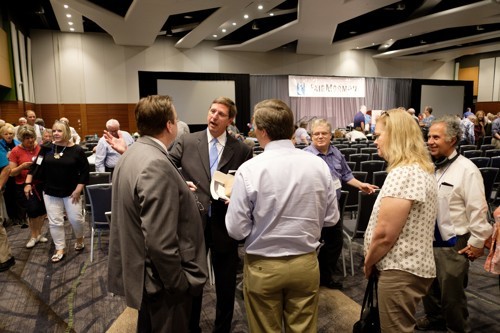 Why Latter-day Saints Need to Defend Our Beliefs, Even as We Avoid Contention

The scriptures of The Church of Jesus Christ of Latter-day Saints clearly advise Christian disciples to avoid the intemperate rhetoric that too often characterizes current religious and political discussions. The words of the resurrected Savior himself to the ancient Nephites will serve to illustrate this counsel:

“He that hath the spirit of contention is not of me, but is of the devil, who is the father of contention, and he stirreth up the hearts of men to contend with anger, one with another” (3 Nephi 11:29).

But while they caution us about the manner in which we do so, such passages scarcely require that we not defend or advocate our religious and political positions. (I’ll confine my attention from here on to discussions regarding religious matters.)

Sometimes, failure to respond to a criticism, claim or attack lends it unearned credibility even when it’s completely without any merit, and allows it to spread widely and to take firm root as if it were true. That is why the late Elder Neal A. Maxwell, of the Quorum of the Twelve Apostles, advised Latter-day Saints to allow no more “uncontested slam dunks” from critics. Falsehoods should not go uncontradicted into the public record.

“Be ready always,” says the King James translation of 1 Peter 3:15, “to give an answer to every man that asketh you a reason of the hope that is in you with meekness and fear.”

The Greek rendered here as “answer” is “apologia,” meaning “defense.” And, rather than the perhaps misleading King James language of “meekness and fear,” several more modern translations suggest that we offer our defense “with gentleness and respect.”

Elder Maxwell was fond of Austin Farrer’s praise of the great Christian writer and apologist C.S. Lewis: “Though argument does not create conviction,” Farrer wrote in 1965, “lack of it destroys belief. What seems to be proved may not be embraced; but what no one shows the ability to defend is quickly abandoned. Rational argument does not create belief, but it maintains a climate in which belief may flourish.”

“Wherefore,” Joseph Smith and Sidney Rigdon were advised in a revelation given at Hiram, Ohio, in late 1831, “confound your enemies; call upon them to meet you both in public and in private; and inasmuch as ye are faithful their shame shall be made manifest. Wherefore, let them bring forth their strong reasons against the Lord. Verily, thus saith the Lord unto you — there is no weapon that is formed against you shall prosper; and if any man lift his voice against you he shall be confounded in mine own due time” (Doctrine and Covenants 71:7-10).

But this responsibility must not be left for the official church to handle entirely on its own. As Elder Kevin W. Pearson, a General Authority Seventy, observed in an important speech delivered back in August of this year, the institutional church cannot do everything by itself. Furthermore, in some cases, answers and testimonies coming from ordinary members of the church and even from independent organizations may well be better received by skeptical outsiders and wavering members than if they came from official channels.

Thus, the cause of commending the gospel of Jesus Christ and of defending the Restoration demands the effort and support of every faithful Latter-day Saint, wherever he or she may be. “Wherefore,” says a revelation given through the Prophet Joseph Smith at Kirtland, Ohio, in mid-September 1831, “be not weary in well-doing, for ye are laying the foundation of a great work. And out of small things proceedeth that which is great” (Doctrine and Covenants 64:33). All of us should participate as we are able.

Note: Regarding Elder Pearson’s speech, see this article on the official news site of The Church of Jesus Christ of Latter-day Saints: “Elder Pearson Says Independent Voices Are Needed to Sustain Faith” at mormonnewsroom.org. A full transcript of his remarks, including the significant question-and-answer period that followed them, can be found at fairmormon.org.

Lead image of Elder Kevin W. Pearson of the Seventy interacting with the audience at the FairMormon Conference in Provo, Utah, Friday, August 3, 2018. Image from The Church of Jesus Christ of Latter-day Saints.