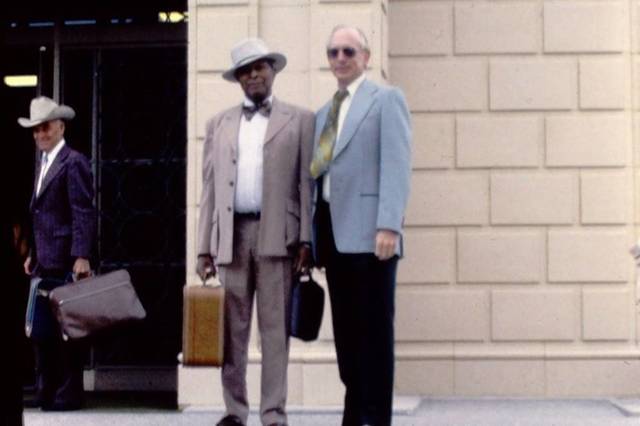 When Harry Bailey Jr. learned from his bishop he could finally hold the priesthood after waiting a quarter of a century for the opportunity, he had his temple clothes already pressed and ready. “He told me once that if he could strip off his skin to hold the priesthood, he would,” Johanna Brutinell said. Learn more about how this amazing Latter-day Saint ministered to his community and remained faithful, despite racism and priesthood restrictions.

When Irval Mortensen, a Church member from Safford, Arizona, tuned in to watch the "Be One" celebration in June, his thoughts turned immediately to a figure from his past; someone he described as an “unforgettable character,” and someone he hoped would be remembered, even as his own memory fades.

As a teenage boy growing up in the Gila River Valley of eastern Arizona, Mortensen spent much of his free time about 10 miles west of his house in the rural town of Central. There, just west of Highway 70 and the railroad tracks that run parallel to the road, stood a small shack-like home on the edge of a cotton field. It was a small and humble structure, likely meant to serve as a semi-permanent residence for a farmer to house seasonal workers. It had no indoor plumbing and no water. Water had to be carried in buckets from across the railroad tracks and highway. With just a small kitchen space, a small bedroom, and a small living room area, the house was hardly considered an ideal place for youth of the area to hang out in their free time, but despite its lack of modern comforts, the house and its resident served as a refuge for many youth in the community.

The full-time resident of the small shack was a man named Harry Bailey Jr., and in the year 1953, when he was baptized, Bailey was one of the only African American members of the Church in the Safford area.