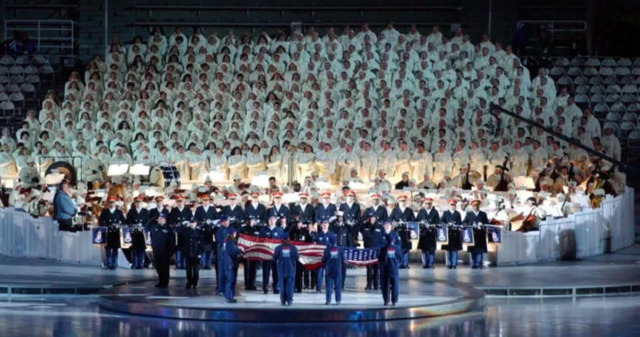 Derek Parra experienced a thrill most of us never will—he earned not one but two Olympic medals in the 2002 Salt Lake City Games. Yet for this speed skater, having the medals draped around his neck wasn’t the most memorable moment of his Olympic experience. What was? Carrying an American flag that had flown above the World Trade Center on 9/11 into the Opening Ceremonies.

In a recent article for Deseret News Mitt Romney writes that his friend Parra expected the stadium to erupt into cheers as he and seven other athletes carried in the flag, but instead they were met with complete reverence. As the Tabernacle Choir began to sing the national anthem, Parra found it difficult to control his emotions.

As the choir reached the end of the anthem, a gust of wind blew through the stadium and lifted the flag from their hands. Parra began to cry because he felt as if the spirits of those who had fought and died for freedom had blown beneath the flag.

Read about this touching moment and Mitt Romney’s experience helping to plan the 2002 Olympics at Deseret News.

►  You may also like: ‘One Step at a Time’: What 1 woman’s escape from the 99th floor of the South Tower on 9/11 can teach the next generation