In early 2020, Mark Clark drove four hours to check out the Kirtland Temple. Taking out his measuring wheel, he walked the grounds and decided he wanted to tell its story—through Legos.

Clark is not a member of the Church, but his Latter-day Saint friends had told him about the significance of the temple, and he wanted to get it right. Previously, the artist has done replicas of other historical landmarks in Ohio, including the Music Hall and the Roebling Bridge, and he wanted to spare no effort in recreating this equally historic site.

A picture of the original temple in the visitors’ center showed the rooftop a dark red, so Clark went about collecting the rare Lego color—but it wasn’t cheap. He bought 500 individual bricks at $2.36 per block, but he was 120 bricks short. He had to buy those at a steeper price, while opting to work with dark gray and burnt orange Legos to duplicate the original sandstone look for the walls. 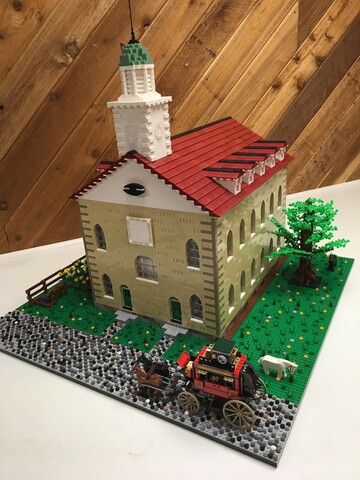 “This particular piece is an origin story,” Clark told Deseret News. “It is an origin of an entire faith, which actually weighed very, very heavily on me this whole time. I want to do the piece justice. I want to do it right. It’s something that is so important for a large swath of humanity. This was not going to be my ugly kid. I wanted this to be the most beautiful piece that I’ve ever done, because it’s so important. It’s as if someone were to do the stable in Bethlehem and try to be historically accurate as it would have been in the moment. There was no way in the world I was going to settle for, ‘That looks fine.’”

But there were other hurdles that Clark faced in the construction of his creation in order to get the temple to stand at 1/50th of its original scale. Learn more about how he figured out the dimensions of the temple and what his plans are for the Lego building at Deseret News.