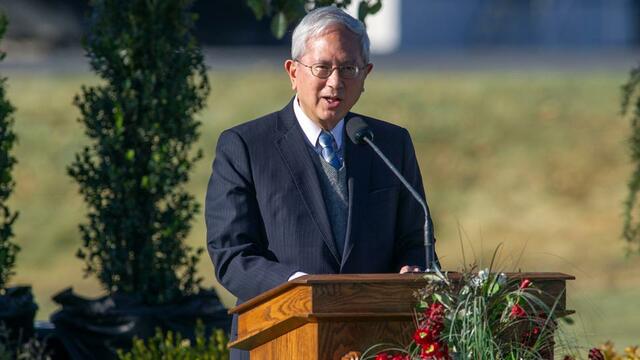 As the Taylorsville Utah Temple groundbreaking began on Halloween morning, the sun was just rising, warming the backs of the handful of attendees. It was a beautiful, crisp October day, complete with blue skies and a few Canada geese flying overhead. People who lived nearby perched on backyard shed roofs to view the proceedings or watched through the chain link fences from a distance as the freeway traffic roared by on one end of the field.

“Turning the soil symbolizes the beginning of construction,” Elder Gerrit W. Gong reminded the small group of members, local government leaders, and media who were able to gather in person for the ceremony. Elder Gong presided at the ceremony and dedicated the land for the building of the temple, which will be modeled after the Provo City Center temple. Elder Craig C. Christensen, Utah Area President, conducted.

With so many temples nearby and COVID-19 restrictions limiting the number of people who were there, it seemed like a small event. And yet, nothing about a temple is small. The scope of the eternal work performed there, the number of families and people who will be blessed and brought together by its presence, and even the size of the building is grand in a reverent way. And the Taylorsville temple will be no exception—something that those who spoke at the groundbreaking explained.

One speaker, 17-year-old Max Harker, shared the story of his pioneer ancestors, who were charged with first settling Taylorsville. Eighty-three-year-old Sister Hazel Weight also spoke along with local Murray resident President Jonathan M. Bowen, who turned some soil with his 9-year-old daughter following the dedicatory prayer. Other attendees included an 8-year-old girl from West Valley and Sister Gong’s 91-year-old mother, Marion B. Lindsay. This span of ages was something Elder Gong found touching—to witness the way the temple brings together generations and brings us closer to our Father in Heaven.

In fact, this span of generations was something that made this particular groundbreaking extra special for Elder and Sister Gong. “Sister Gong is a Taylorsville girl,” Elder Gong shared. In fact, her grandfathers, dating back to 1877, served as bishops in the Taylorsville ward. Later, Sister Gong’s father, Richard Lindsay, was the bishop of the ward when a stake center was built—the stake center that was torn down to make way for the temple. And yet, Elder Gong says, “Whether you’re the first generation or the sixth generation, this is still your home . . . and that’s a great thing about this church. We have great diversity, but we have unity in the faith, unity in the House of the Lord.” 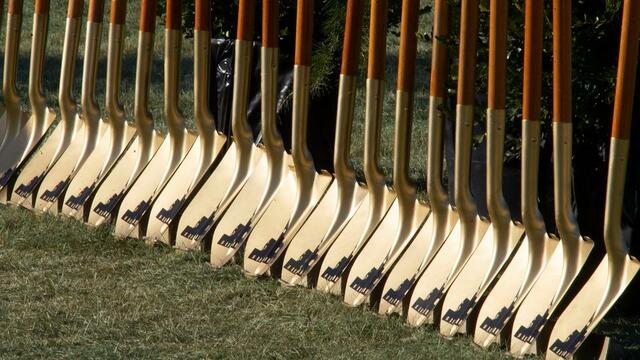 Joann Gomez, who spoke at the groundbreaking, represents one of those “first generations.”

Though she was originally asked to represent the young single adults in the Taylorsville area, due to some delays to the groundbreaking ceremony, Sister Gomez spoke instead as a newlywed. She was sealed to her now-husband in the Draper Utah Temple two weeks before she spoke.

During an interview with LDS Living following the groundbreaking, Sister Gomez shared that her father joined the Church in his early twenties, and though her mother is “not very religious,” Gomez’s parents agreed she should be raised in the Church. So, for her, temple covenants bring a great opportunity to start something grand. “It’s been a goal my whole life to be the first person to start an eternal family [in my family] and to make those eternal covenants, and it’s something I feel very blessed to have been able to do,” she said. “The Lord promises us wonderful blessings from these covenants, and I know they will come to pass, and then I can be the first person to start that eternal line.” Gomez and her husband now live in Sandy, and as she says, “We will be here watching [the temple be] built, we will be here for the open house, we’ll be here for the whole thing!”

Wherever you live and whichever temple you are waiting for, Elder Gong reminds us, “Every temple is a House of the Lord. It invites us to find holiness to the Lord and it’s also a light and a blessing in its community. Every temple is a place where our Father invites us to join our name and the name of our Savior in sacred ordinances that bless us in time and eternity.”

Find more coverage of the groundbreaking on Newsroom.