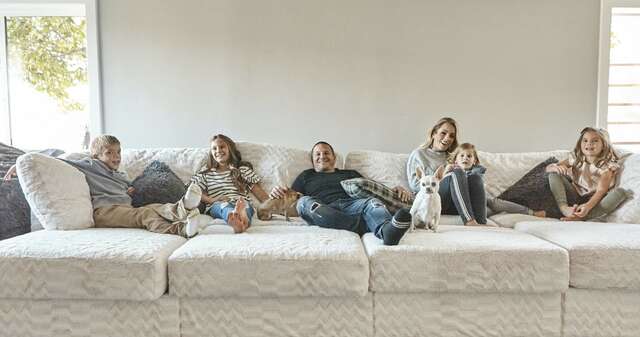 The year was 2001 and Shawn Nelson was ready to throw in the towel on the small business he had started as a student at the University of Utah. After returning home from serving as a full-time missionary in Taiwan, Nelson broke out a giant foam-filled bag he had made pre-mission. The bag was used to sit on at drive-in movies or on camping trips, and it started to catch the eye of neighbors and friends who asked if Nelson would make them one. The bags gave Nelson something to do during college, but they never really made him a profit. So as he entered his final semester of college and in anticipation of moving to China after landing a “dream job,” he decided to close up shop—figuratively speaking.

The decision was met with disapproval by customers, family, and friends who believed in the product, so Nelson decided to make one last push by taking his Lovesacs to a trade show. Nearly 20 years later, Lovesac was named the fastest-growing furniture company in America in 2019—but that may not have been possible if it weren’t for the fact that Nelson learned how to speak Mandarin on his mission. Nelson shared his story and expressed his gratitude on this week’s episode of All In.

Shawn Nelson: So we took it to a trade show and got discovered by Limited Too—now known as Justice, the little girls’ store in the mall. They wanted 12,000 little Lovesacs for Christmas. They placed the order sight unseen, not realizing it was me and some buddies and like a grain grinder, kind of like a woodchipper shredding foam, out of the backroom of this furniture factory. But it was [a] 12,000-piece order, so they FedEx me this piece of blue, fuzzy fabric with little silver specks, and they said it has to be this fabric, and it has to be super cheap, 12,000 units.

I flew off to North Carolina to find the fabric. I found it, but I couldn't afford it, couldn't meet their price. I'm looking around this fabric booth at the biggest fabric show in the country, and this guy's got all these fabric samples behind him in these boxes. I'm about to give up, by the way, thinking, "Look, I'm a college student. I'm a waiter. I'm waiting tables every night, paying my way through college. I have no business buying 30,000 yards of fabric, and no money either." But he said, "I'm a direct importer, you're not gonna get it any cheaper." But there are these boxes with Chinese writing on them behind him, and of course, I can read it. And it was the address of the fabric mill that makes this blue fuzzy fabric with little silver specks in it, so I couldn't give up now.

I got a credit card on my way to Shanghai, China, walked in the 32nd floor downtown office of this fabric mill's sales headquarters, and I said “hi” in English. I said, "Hi, I'm Shawn. I'm here for Limited Too, and I need 30,000 yards of this stuff." They said "Yeah, no problem. It's five bucks a yard." I said, "No, no, no, no, I need it for like half that." And they started talking amongst themselves in Chinese about how much it cost to make this stuff, so I knew that they could hit my price. I knew they could do it, because I'm sitting there listening and they were just talking right in front of me. Finally, after two or three days of negotiation, I got the price down to where it needed to be. They were going to cut them and sell them and ship them to me with our logo on them, and I had to stuff them. So I flew back to the United States, [and] credit carded our way into this old factory, having twisted my client's arm to give us a $65,000 deposit to get started on the order from China, and we were off to the races.
Let's fast forward. We got that order done. That's a whole story unto itself. It was messy and difficult and crazy and hard. On the heels of that, no other companies wanted to buy our stuff. You know, I hadn't been out selling, I had been in the factory trying to get this order out, so we scrambled before Christmas. All of the furniture companies in the west—RC Willey, American Furniture, these big furniture companies people know—rejected us. They thought it was stupid, our name was stupid, our product was too expensive, too big, whatever. So we opened our own store at the Gateway Mall in Salt Lake City, who originally rejected us, presuming we were just a fake little company, but they let us fill a space in their mall over Christmas and the [2002] Winter Olympics. It just exploded. We couldn't believe it. People were buying these things right off the floor at the Gateway Mall.

Morgan Jones: Well, Shawn, I've been taking some notes as you've been talking because I want to make sure that I hit all of the important parts here. Let's go back for just a second to your ability to speak Mandarin. It's amazing to me that you saw that on the box, were able to read it, and then follow it, and then that ability to speak Mandarin served you all the way through in developing this company. So I'm interested—many entrepreneurs have talked about the benefit of serving a mission in the entrepreneurial world, and I think many times it's because they're not afraid of rejection. We're used to knocking on doors, we're used to people telling us no, but what role has your mission played for you as an entrepreneur, and what kind of gratitude do you have toward that experience—especially in its ability to teach you Mandarin [and] for giving you an opportunity to learn that?

Shawn Nelson: Yeah. Well, obviously, in my case, the language has been pivotal, and it continues to be. It's kind of a funny story about how Mandarin Chinese, the ability to speak, or at least listen to it, paid into the actual creation of this company. Without it, I don't think it would have happened. It certainly wouldn't have happened the way it happened, because we began sourcing overseas at a very, very early stage. Like, way earlier than most companies could ever dream of because of that. I was not afraid to operate over there, I was not afraid to fly over there, I was not afraid to try to do business over there, even though I used English at first. And, by the way, one of the funniest moments was a year later—we had now done millions of dollars in business with that supplier that we started with—and over a steak one night when he was visiting in the United States, in my best Chinese, I said to him, "You know that I speak Mandarin, right?" And I had to say it almost like two or three times because it caught him so off guard because we had always spoken English, and I could just see the last year of his life rewinding in his mind, like, "Oh my gosh, what have I said in front of this guy?" So, funny story on the language for sure.

I think it goes so much deeper than that though, to your point. Being a missionary trains you in 100 other ways. It just makes you tough. You have to live in a strange place at a young age and do it on your own. I think there's something extremely powerful in that, and you're not a tourist. You're not there for two weeks or two months—I mean, it's a long chunk of time. At the time, it's a tenth of your life. And so it's a huge blessing. And you know, it's funny, I mean, for missionaries, that the blessing is the mission, the blessing is the experience. Sadly, I worry that I took a lot more than I probably ever gave, because it blessed my life in so many ways—teaching you independence, teaching you mental toughness, teaching you how to get along, even with people you don't necessarily . . . get along with. All of these things matter in business and in relationship building. Languages, things like that. And, you know, the language is a lot more than just like, "Oh, I speak Mandarin. I can do business." To be honest with you, you can do just fine in business speaking English, but it's really about building relationships.

So [it’s] the combination of the things you learn on your mission overtly—how to build relationships of trust, combined with the opportunity to speak someone's language and get to know them intimately. I'm the only client of most of my suppliers in Asia that they can even be friends with. They've sent their kids to me for the summer for internships, because we have that kind of trust, and everyone else to them is just a white guy doing business, and I'm a personal friend of theirs. So when push comes to shove, and you need millions of dollars of support at different times, at least in my evolution as a business person, you need someone to take a risk and just say, "Look, I'll pay you later, whatever it may be," that's really where the language—and, frankly, forget the language—relationships matter. For me, the language has fostered those relationships, and that all came from the mission.