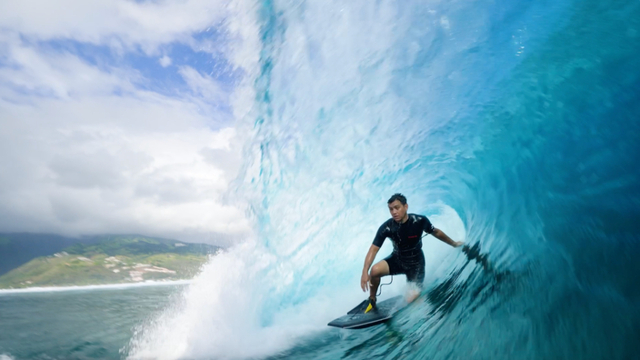 Worship over waves: Why this Tahitian bishop and professional surfer will likely never win another surfing competition

Age, injury, or decline in ability are all reasons a professional athlete will typically retire from their sport. But professional surfer Tuhiti Wong Pao-Sing’s career is far from over, and yet he will likely never win another surfing competition.

In making his decision, Tuhiti reflected on this counsel from President Russel M. Nelson about keeping the Sabbath Day Holy: “In my much younger years, I studied the work of others who had compiled lists of things to do and things not to do on the Sabbath. It wasn’t until later that I learned from the scriptures that my conduct and my attitude on the Sabbath constituted a sign between me and my Heavenly Father. With that understanding, I no longer needed lists of dos and don’ts. When I had to make a decision whether or not an activity was appropriate for the Sabbath, I simply asked myself, “What sign do I want to give to God? That question made my choices about the Sabbath day crystal clear.”

Since choosing not to compete on Sundays, Tuhiti has gained the respect and recognition of his peers and local media in French Polynesia. “My friends in the circuit often ask me to pray for them,” he says.

In 2020, Tuhiti was called to be the bishop of the Papeari Ward in Tahiti. The local Church leader who called Tuihiti told him, “I know that your example as a devoted young man who endeavors to put the Lord first will inspire young people to walk the covenant path.”

Read the full story on Newsroom.

Lead image: The Church of Jesus Christ of Latter-day Saints