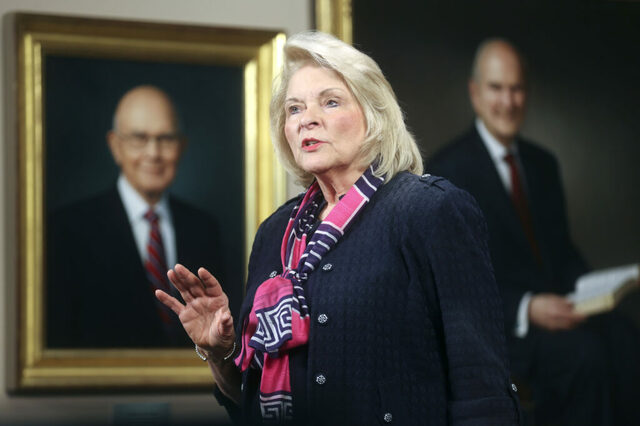 Why viewership of President Nelson's #GiveThanks message 'dwarfed anything the Church had ever released,' Sheri Dew explains

Last fall, Church leaders were brainstorming the possibility of recording a message of hope for Church members. After their meeting, President Nelson received a strong impression that he needed to record a message for the world, not just members of the Church. And the #GiveThanks video was born.

“The message was to be about expressing gratitude to God, and it needed to include a prayer for the world. He told us the day and time the video should be released and even how long his message should be,” Sister Dew recounted.

“That video’s reach through social media and various international television networks dwarfed anything the Church had ever released, especially to those not of our faith. Never before had so many people heard a prophet’s voice. And why? Because we heeded the counsel of a seer, who could see things we could not see.”

From the Conference Center on Temple Square, Sister Sheri Dew testified of the unique privilege we have to have living prophets, seers, and revelators on the earth today.

“There is no greater safety in this life than following the prophet,” she said. “Prophets are one of God’s greatest gifts to His children. They form an unfailing safety net of truth.”

Sister Dew shared a story in which a stake Relief Society president met with a “deep thinking” friend who told her, “I’ve been reading the Bible, and you may think I’m crazy, but I think we need what they had in Bible times—we need a prophet to help us know how to deal with all of the problems we have!” The Relief Society president responded to her friend, “I hope you don’t think I’m crazy, but we have a prophet, and he speaks to us and helps us know how to handle our challenges. We have a prophet.”

When considering the fallibility of prophets, seers, and revelators, Sister Dew commented, “That’s the wrong question. A better one is, Who exactly are prophets? They are the ordained holders of priesthood keys that authorize the Lord’s power to be distributed throughout the earth. They may not be perfect. But they are the most perfectly inspired leaders on earth, and their only motive is perfectly pure—to help us find our way back home by pointing us to Jesus Christ.”

► You may also like: 8 powerful quotes from President Nelson's message of hope and healing