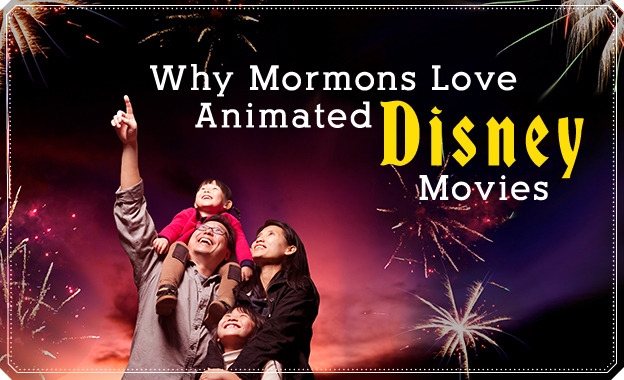 It's the moment you've all been waiting for! Time to announce the Best Animated Disney Movie of All Time!

As a refresher, Disney classics have been dropped right and left over the past three weeks, ending with a final showdown last week. Focusing on animated movies only and discounting Pixar collaborations and sequels, I am happy to announce that the winner is, drumroll please, Beauty and the Beast!

One online reader summed up a few of the most-likely reasons Beauty and the Beast came out on top: “I picked Beauty and the Beast. Out of all of them, everything comes together perfectly--music, art, characters, screenplay, and a great message, too. I think so much of this was owed to the partnership of Menken (composer) and Ashman (lyricist).”

Whether it was one of these reasons or something completely different, it is a bit of a mystery to exactly pin down why Mormons are drawn to Disney. Why has not only Beauty and the Beast, but any Disney movie survived the years and kept a special place in the hearts of Mormon families? Just what is it about Disney movies most Mormons love?

One easy thing to point at is how clean Disney movies are. Because the entertainment giant aims primarily at engaging children, you’ll find nary a curse word in the majority of their flicks (to be fair, this is more a trend with animated movies than live-action ones like Remember the Titans). One online reader noted, “It’s nice to watch a whole movie and not cringe because it has swear words.”

Which brings me to another reason Mormons love Disney: it’s a family affair. The Mormon faith puts a huge emphasis on families (FHE and nightly family dinners, anyone?), and Disney fits right in with that. Many parents grew up with Disney, and Mickey and his friends are still charming little ones today. I don’t know about you, but there are some jokes I just didn’t get as a kid that make watching Disney movies fun for me now as an adult, too.

And I’ll be honest: Disney knows how to put on a good show for all ages. They tell a great stories with catchy tunes and beautiful animation. Simply put, Disney movies are fun to watch.

But there’s more to it than Disney movies being squeaky clean and compelling family flicks. A lot of the best Disney films, as many of our online readers pointed out, are heartwarming and teach a moral lesson. One reader noted of Disney’s Winnie the Pooh, “As adults we could see parallels to life and how we would like it to be, and it seemed that even though our children couldn't identify parallels, their spirits understood. Afterwards it was as if we all felt and acted nicer towards each other and our activities.” Another reminisced of The Emperor’s New Groove, “I love how the emperor learns compassion. It teaches little one's a good lesson about being kind and being a good friend.” If you watch with the right mindset, every Disney movie has something wholesome to teach. So all in all, as Mormons seek after things that are “virtuous, lovely, of good report, or praiseworthy,” we find Disney frequently fits the bill.

Last of all, I feel like there’s a quality to Disney movies that I like to attribute to Disney “magic.” There’s that something you can’t really put your finger on that makes it more than just another movie, just another story. And maybe it’s just the combination of the several factors mentioned here, or maybe, as I like to think, Disney has become holds a special place in our hearts where you can wish upon a star and all your dreams come true.