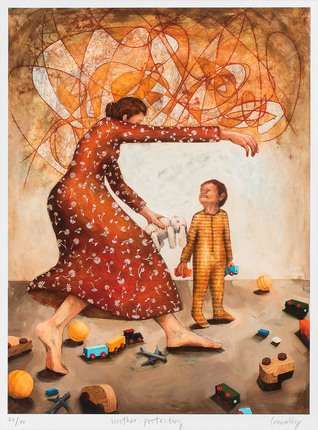 LDS artist Caitlin Connolly might be young, but her artwork captures emotions in a powerful way that transcends language.

"I think one of my favorite things is when somebody is able to look at a painting that I’ve done and just say, 'Oh, I’ve felt that way before' or 'That is how I feel,'" she says. "So much of what we feel and experience in life is really hard to explain verbally—or, at least for me. Art, I think, can transcend to a different level where you still can’t put it into words, but you can look at it and say there’s something, some part or element of that. Art means something for you that first day, but then you look at it five years later and think, 'Oh, now it means something different to me.' So it can kind of grow and change with you as you change."

Connolly says one of the themes in her paintings is strength—especially in the women she portrays. "I think that Mormon women are trying to find a greater sense of strength within themselves. And I think that they’ve been called to do the most insanely hard job—to raise a family. Women struggle with so many things—men and women both. I don’t feel like women’s struggles are more than men’s, but I have come to understand [women's struggles] more than I have some of men’s struggles. They’re just different."

The following paintings by Caitlin Connolly are now available at Deseret Book stores and at deseretbook.com, and LDS Living readers are getting the first look:

She Became Herself with Tears by Caitlin Connolly 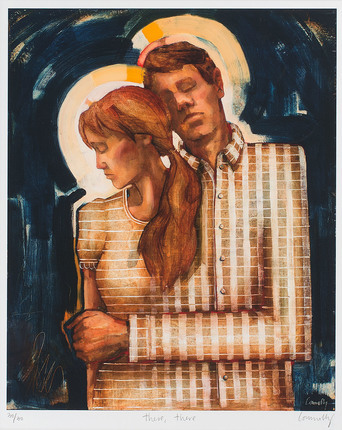 There, There by Caitlin Connolly

To learn more about Caitlin Connolly, watch this video and read the interview below:

How does somebody know about an artist and how they create? Why have you gravitated toward painting and your subjects of painting?

"I drew a lot as a kid, but I think I gravitated toward art when I was in college when I realized that art was a lot more—or could be for me—a lot more about storytelling than simply reproducing something. And I think every artist finds a different kind of core desire, or core part of their heart for why they like to do what they do. For me, that was a really big aspect of it—just wanting to tell a story and share an experience."

So you’re painting emotions. What does it take to do that, versus an illustration or description of something that happened?

"I'm still figuring that out. I do a lot of sketching and I do a lot of writing, so I feel like I'm constantly trying to figure out these emotions. Sometimes I write about them, and when I’m writing I kind of get an idea where I think, 'Cool—I want to draw that.' Sometimes I’m just sketching and then this emotion comes out where it’s very literal and exactly what I’m feeling, or more of a generalized idea. I hope that my figures are able to kind of share that emotion. Sometimes the composition is more of a literal message, and sometimes I hope it’s just the person, like there’s something about that which makes you feel something."

Do you feel like as you gain a little life experience that it’s easier to express an emotion in a painting?

"No, actually! I don’t think it has anything to do with age. I can mention a really great talk by Marvin J. Ashton, where he just talks about being an adult and how age doesn’t mean that you have more wisdom or understanding. I don’t think that experience equates to better paintings, except for the fact that you’re always improving. I think that some of my favorite paintings for me, personally, came from a place of curiosity. Sometimes when you’re young, you’re more curious, and so I think it’s a trick to be able to remain curious the older you get, and still keep creating great work and maintain that child-like curiosity."

Is it difficult to paint something you have not experienced?

"I think that…there are some things where it’s much more literal like, 'This happened to me yesterday,' and then there are some things where it’s more just a generalized concept. Motherhood, for example—I’ve done a lot of motherhood paintings, but I’m not a mom yet. I do know that one of life’s greatest challenges is trying to remain empathetic and 'mourning with those that mourn and comforting those that stand in need of comfort,' so I feel like that has been an interesting part for me in creating. [With] motherhood, I have a lot of friends going through it, and I just sit there and watch them struggle with their kids and chaos, I watch them be so patient and so kind and so good, [but] I guess I’m not the central person in the painting. Sometimes I am—sometimes I’m standing right outside of the painting watching those people. It still feels personal in that way."

Caitlin Connolly is an artist, musician, creative enthusiast, and wife of a guitarist. Born and raised in Utah as the only girl in a family of three brothers, Caitlin grew up coloring the walls with crayons while becoming well-acquainted with boy scouts and power tools. She graduated from the University of Utah in 2009 with a BFA emphasizing in Painting and Drawing and has been passionately pursuing and cultivating her creative path since that time. She now lives in Provo, Utah with her husband and her dogs, Albus and Gustav. She loves spending time in her studio, touring on the road with her husband, journaling, song-writing, and watching a good TV show. To see her website, click here.