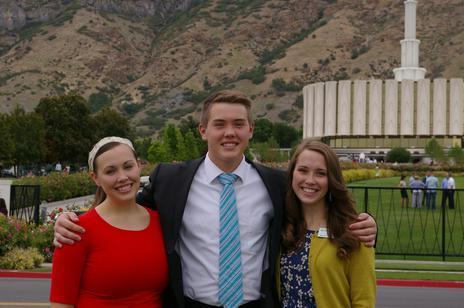 3 Siblings Serve in the Same Mission in Taiwan

Three of the four children born to Greg and Gina Anderson of Springville, Utah, have served missions for The Church of Jesus Christ of Latter-day Saints. All three of them have served in the Taiwan Taichung Mission.

Kelsi Anderson Flint was the first of the Anderson children to serve in the Taiwan Taichung Mission from 2009-2010. Her younger sister Marissa Anderson Woolsey served in the same mission from 2013-2014, and their younger brother, Miles, is currently serving there.

“We calculated the odds of all three of them going to Taiwan Taichung and all three serving in the same city,” said Greg Anderson, an associate professor at Brigham Young University. “And it is pretty much about zero percent until you factor in Heavenly Father, and then it becomes 100 percent.”

Before 2009, the only connection the Andersons had to Taiwan was their grandfather, who was stationed there briefly while serving in the U.S. Air Force.