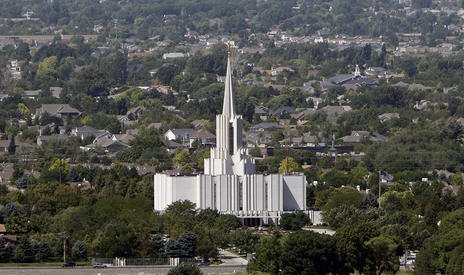 Check out these tender memories of the Jordan River Temple, which has been closed for extensive renovation and won't open until the latter end of 2017.

Of all the temples dedicated during his time as president of The Church of Jesus Christ of Latter-day Saints, Spencer W. Kimball said the Jordan River Temple was perhaps the most significant.

A short list of reasons is found in his biography, Spencer W. Kimball: Resolute, Disciple, Prophet of God, by Francis M. Gibbons.

"It was the first temple constructed in the Salt Lake Valley since pioneer days; it was financed entirely by member donations; modern technology was utilized in the presentations within the temple; and the temple's name conjured up images of the Holy Land," Gibbons wrote.

Announced in 1979 and dedicated in 1981, the Jordan River Utah Temple has served members in the Salt Lake Valley for the past 35 years. Last fall, the First Presidency announced the Jordan River Temple would close for most of 2016 and most of 2017 for extensive renovation.

As the Jordan River Temple undergoes this change, the Deseret News has collected several memories shared by Mormon leaders and others who have served within its walls.

Where is President Benson?

Wilcox describes attending the inauguration of new BYU President Rex E. Lee on a Friday morning. Wilcox noted the attendance of several LDS Church leaders, dignitaries and state and community leaders, all except for one important individual.

"Where was President (Ezra Taft) Benson?" Wilcox wrote. "I wondered if his health was failing and, therefore, he could not attend. I had heard him speak recently, and he had seemed vigorous and strong. Were there other meetings or duties he needed to attend to as he carried the weight of his prophetic mantle?"

The following Friday, Wilcox learned the answer while attending an endowment session at the Jordan River Temple with members of his ward. . . .

Mormon Life Temples ProphetsTemples,Prophets,Mormon Life
Comments and feedback can be sent to feedback@ldsliving.com