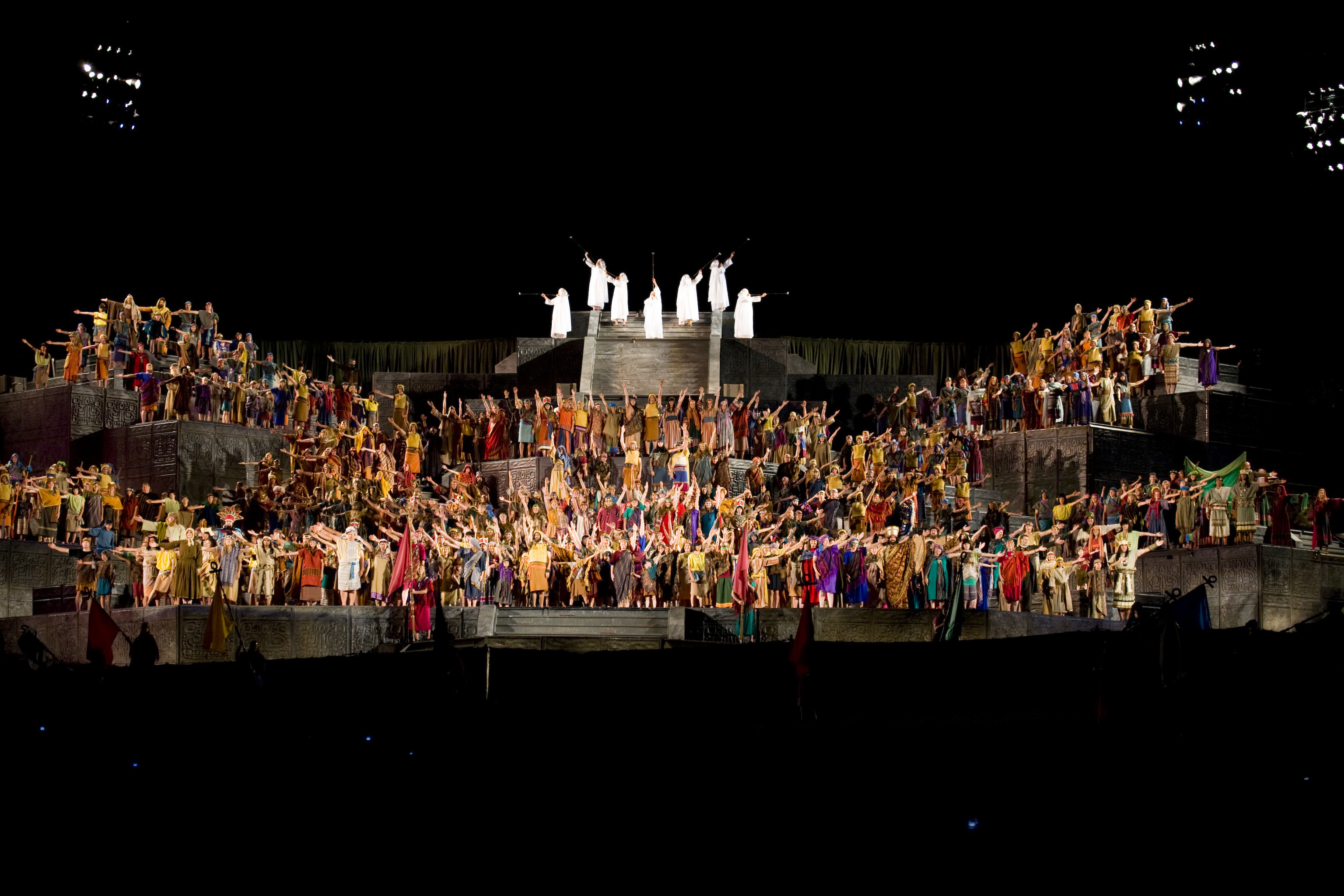 Behind the Scenes of the Hill Cumorah Pageant

This year, while most Americans were sleeping, I was excitedly boarding a 1:00 a.m. flight. After one layover in Atlanta, Georgia, I would be landing in Rochester, New York, at around 11:00 a.m. local time before loading onto a bus with a handful of other weary but eager travelers destined for the Hill Cumorah in Palmyra.

Though many Mormons have heard of the Hill Cumorah Pageant – the enormous annual production presenting stories from the Book of Mormon and loaded with special effects like volcanoes, storms, and pillars of fire – few probably realize the short amount of time and the incredible amount of work and sacrifice required to put the show on each year. The experience really starts when applications and bishop’s recommendations are submitted in September, a year before. From there, each of the thousands of applications are read and prayed over, and the final cast is selected and notified by December.

Seven months later, on the afternoon of July 4th, I and nearly all of the 735 cast members have arrived by plane, train, or camper at the hill where everyone enjoys some dinner before the welcome devotional. Immediately after the devotional, casting begins. The women are cast first, followed by the men. Each group follows instructions to dance, recite a line, or show a certain emotion until everyone has their own special role assigned to them.

The next morning, Saturday, starts bright and early with an 8:30 a.m. devotional and a quick look at the rehearsal schedule to find out where we need to be to start learning our scenes. I have been cast as Lehi’s daughter for the wilderness scene, and also as an 1800s woman during the final scene about the Restoration, so I have several rehearsals and a costume fitting to work around lunch and dinner. Whenever I am not rehearsing, I make sure I am in my assigned cast team - a group of 12-15 cast members my same age – so I can be easily found if needed. (You don’t want to be the one the directors are trying to track down on their walkie-talkies!) The first day ends a little early (around 10:30 p.m.) so we can arrive at the hill first thing the next morning for sacrament meeting.

Sunday is low-key compared to the day before, but still busy. Church is held at 9:30 a.m. in the Study Shelter – an open pavilion where meals and daily devotionals are held – before we are released to our “Sunday Rehearsals.” While we keep the Sabbath day holy and do not practice our parts, we still meet with our directors and discuss some of the spiritual aspects of our scenes and roles. We spend time with our cast teams or squeeze in a walk up the hill between lunch and our first combined rehearsal, where we learn our music cues for our all-cast scenes. Before we know it, the day is coming to an end, and we have dinner and a closing devotional by the local mission president. In that devotional he says a special prayer that sets the entire cast apart as missionaries for the duration of the pageant. It is our last early night for the rest of the pageant because from now on we have long days of practice, starting tomorrow with rehearsals all morning and our first run through in the afternoon!

The next several days are full of 8:30 a.m. devotionals, morning rehearsals with individual scenes, and practices with the entire cast. We have lunch and dinner, go to missionary trainings provided by six local full-time sisters, fulfill cleaning and service assignments backstage, set up over 6,000 chairs for the audience in record time and then wash them all. There are choir practices during lunch, opportunities to speak in other cast teams, volleyball, Frisbee, and crafts in the resource center if you ever find a rare moment of quiet time. Evenings are busy with early dinners, run-throughs, and dress rehearsals as individual scenes are finally pieced together with the narrated soundtrack and everyone figures out where they need to go and when. But by the time we leave the hill between 10:30 and 11:00 p.m. each night, we are hungry again and looking forward to unwinding with food and friends for a few minutes at late-night “munch and mingles.”

Cast members setting up the several thousand chairs for the audience

Wednesday, five days after our arrival, our brief pageant missionary training is complete and we have our first dress rehearsal.  By the time opening night arrives, exactly one week after receiving our roles, we are all happily exhausted, but eager to greet the first 5,000 audience members who have come to learn more about the Church or have their testimonies strengthened.

Participating in the Hill Cumorah Pageant is a lot of work with a huge payoff. Not only do cast members see the positive reactions from audience members, but a Zion-like community is formed where lasting friendships are made, testimonies are strengthened, and spiritual growth is obvious. My testimony grew as I had so many opportunities to share it with Latter-day Saints and community members alike before each performance, and the scenes from the Book of Mormon will be even more real and meaningful to me as I study them in the future. When people ask me if I would do it all again, they don’t even have to finish the question before I answer YES! If you ever have the opportunity to go to the Hill Cumorah Pageant as an audience member or cast member, I say go for it—I promise you won’t regret it.