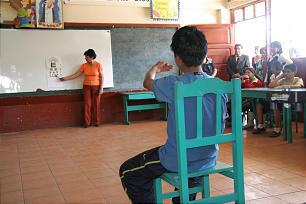 Eduardo Gonzalez spends his time away from school working in his family's Ayacucho roadside chicken restaurant — sweeping floors, busing tables and doing whatever needs to be done to keep customers happy and help his parents pay the bills. But the food services industry, he said, is not in his long-term future.

Eduardo plans to be an engineer.

A lanky 13-year-old with an affinity for numbers and mathematics, the young Peruvian believes the engineering profession suits him well. "To be an engineer," he explained, "you need to be strong in math and you have to think."

Still, Eduardo's would-be path to his professional dreams has been rocky. Ever since he began school he has struggled with his studies. His parents know he's a bright boy, but he has had to repeat school grades and has had trouble learning to read. Teachers have sometimes questioned his capacity to retain information. Engineering dreams aside, Eduardo' academic possibilities appeared limited just two months ago.

Things look suddenly — and literally — brighter for Eduardo and thousands of others here in this Andean region of Peru's southern interior. Thanks to a large-scale humanitarian vision project sponsored by the Church, it was discovered that Eduardo was significantly near-sighted. He didn't need any special academic tutoring; he simply needed prescription glasses to see the chalkboard and what was happening in his classroom.

"Now that Eduardo has received his glasses, my son will live in another world," said his grateful father, German Gonzalez. "He's going to feel more content. He's going to share the same teachings as everyone else in the classroom. He's going to respond."