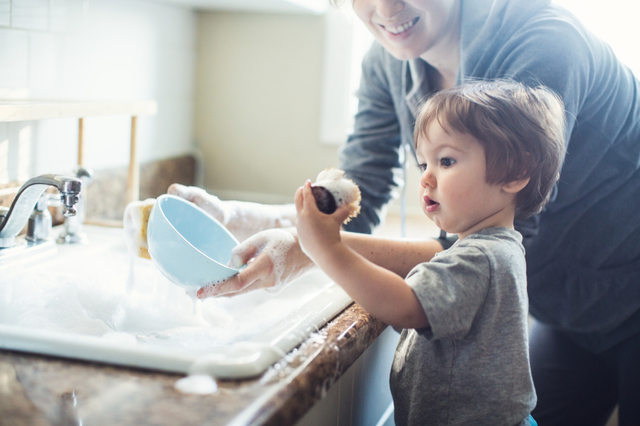 Wouldn't it be better if you and I stepped up to do a job that is rightfully ours?

For what shepherd is there among you having many sheep doth not watch over them, that the wolves enter not and devour his flock? And behold, if a wolf enter his flock doth he not drive him out? Yea, and at the last, if he can, he will destroy him.

And now I say unto you that the good shepherd doth call after you; and if you will hearken unto his voice he will bring you into his fold, and ye are his sheep; and he commandeth you that ye suffer no ravenous wolf to enter among you, that ye may not be destroyed.

Procedure: Display a heavy object, and explain that you can't lift it alone. You need others to aid you in this process. Have the rest of the family help you lift the object.

This is a story about four people named Everybody, Somebody, Anybody, and Nobody.

There was an important job to be done and Everybody was sure that Somebody would do it.

Anybody could have done it, but Nobody did it.

Somebody got angry about that because it was Everybody's job.

Everybody thought Anybody could do it, but Nobody realized that Everybody wouldn't do it.

It ended up that Everybody blamed Somebody when Nobody did what Anybody could have done.

The Salt Lake City airport was unusually crowded that morning. A mass of humanity moving along the concourse formed an irregular pattern of coming and going. The "crossroads of the West" was evident as planes circled overhead waiting for the signal indicating each pilot's turn to deposit passengers, some for connecting flights and others returning home to the valley of the Great Salt Lake.

Inside the airport, small clusters of people gathered, forming a microcosm in a world all their own. Emotions were high, and tears filled the eyes of some. A father in a warm jacket and well-worn trousers gave his son a last embrace as the young man, in white shirt and new dark suit, tried to hold back his tears. While some people were hanging on to the minutes ticking away too fast, hoping to prolong the time before departure as long as possible, others impatiently waited for the time to pass more quickly. Standing by the window and anxiously observing the planes coming in, a woman in a small group struggled to keep back the tears as time for her seemed to have slowed down, if not actually stopped. Here and there were people who were alone - some walking with a clear sense of direction and purpose, others strolling along while drinking in the scenes of the airport drama. Occasionally a lone traveler, unkempt and with a troubled countenance, wandered through, seemingly undirected, going anywhere and maybe nowhere.

These scenes I had become accustomed to in my travels in many parts of the world. I routinely smiled at the joy of those awaiting the return of a loved one and felt some emotion for those bidding farewell and also some concern for the lone and troubled traveler.

I began the familiar walk down the concourse to Gate B-6. Just a few steps ahead of me I noticed a young mother with a baby tucked securely under one arm and a heavy bag weighing her down on the other shoulder. I pushed forward, thinking I might be able to offer some assistance. When I got next to her, I observed her concern. Hidden down between the passengers were three little children, all hanging onto their mother's skirt, crowding against her legs, and making it difficult for her to walk and maintain her balance in the crowd. She bent over in an effort to communicate with her little flock. By now I was within hearing distance of this anxious traveler, and between the loud voice over the intercom giving directions and announcing departing flights, I heard this mother say, in an anxious tone, "Listen to me. We must take hold of hands and hang on tight."

At that very moment I felt a small hand slip into mine. I held it gently for only a second or two, and then it was quickly withdrawn. The little child had responded. It was my hand that happened to be close, and she took hold. For just a moment I felt an overwhelming sense of responsibility for this little child I didn't even know and concern for a mother I had never met.

The Prophet Joseph Smith taught that life is like a huge wagon wheel. Like the revolving wheel, all of us at some time will find ourselves on the bottom, needing someone literally to pull us up. But as life evolves, there will be times when we are on top of the wheel and can reach down and help lift others up.

May we remember always the counsel given by the young mother to her little children in the busy airport with crowds of people going many different directions: "We must take hold of hands and hang on tight." Let us become a community of saints bound together by our common goals and our eternal relationship as brothers and sisters in the gospel of Jesus Christ.

In a small saucepan over medium heat, boil raisins and water until the water evaporates (check often so pan doesn't become dry, burning the raisins). Remove from heat and set aside. In a large mixing bowl, cream together butter or margarine and sugar. Add eggs and vanilla, and mix well. Stir in raisins. Stir or sift together flour, salt, baking soda, and cinnamon; add to creamed mixture. Stir in nuts and mix well. Form dough into balls the size of a walnut, roll in sugar, and place on greased cookie sheet. Bake at 375 degrees for 10 to 12 minutes. Makes 2 dozen cookies.