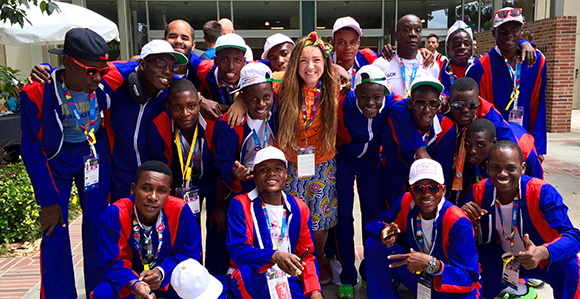 MR says: From holding country dances at the stake center to bringing new investigators to church, the Saints who helped with this year's Special Olympics went above and beyond to reach out and share their beliefs.

Abby Eyre, a recently returned missionary to the West Indies, was using her mission language as she had never expected. She was a volunteer interpreter and assistant to the Special Olympics delegation from Haiti, and they were about to forfeit their first soccer match in the Los Angeles 2015 Special Olympics World Games for lack of equipment.

Concerned spectators provided the Haiti delegation with soccer cleats, and one coach became interested in Sister Eyre’s missionary experience. He asked to attend a Church service, and she gave him a copy of the Book of Mormon.

Sister Eyre realized the two weeks she spent with the Haiti delegation—one of 177 Special Olympics delegations—was no less a part of her Latter-day Saint service than the formal missionary work she had finished in May.

“I feel like service is the epitome of member missionary work now, and I never realized that before,” said Sister Eyre of the Orange Hills YSA Ward, Irvine California Stake.