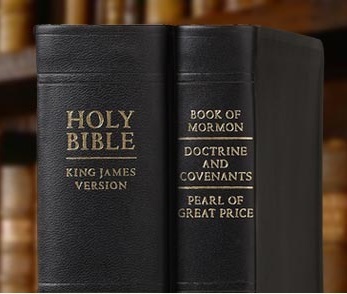 "The decision to have a new edition was decided back in 2004," Elder Neil L. Andersen said in a video released by the Church. "In a very careful, methodical way, people looked at all the footnotes, all the study aids, and any changes that were recommended were brought forward to the general authorities and finally to the First Presidency and the Twelve, who all felt unified and complete on what was determined."

These changes have been implemented in order to better be able to help the Saints use and understand the scriptures.

"It was a magnificent time," Elder Andersen said of the changes that occurred in 1981. "And now with technology and computers and with another thirty years of history, we're just able to do a little better."

So what are the changes that have been made?

Many of the changes are minor and most likely wouldn't even be noticed by the average reader.

"To some extent, it's adding a comma or a semicolon or tying one verse to another," said Elder Andersen. "It's just a refinement of our 1979 and 1981 edition."

These changes include the following:

● The quality of the font and typeface has been improved for clearer reading.

● Some minor typographical errors in spelling and punctuation in the text have
been corrected to ensure fidelity to the earliest manuscripts and editions.

● In the Book of Mormon, all scripture text that is part of the translation from the
plates has been placed in roman typeface. Only study helps, such as chapter headings, remain in italics.

● The style and format of titles have been standardized throughout the scriptures.

● The introductions, tables of contents, and abbreviations pages have been
standardized.

● The style and language of the chapter summaries has been standardized throughout the scriptures.

● Several spellings have been modernized, including mixt to mixed, vail(s) to veil(s), enquired to inquired, and several others.

More than 99 percent of the corrections are in the study aids (chapter summaries,
footnotes, Topical Guide, Bible Dictionary, and triple combination index).

Errors in cross-references, dated information, or misquoted text have been correct ed in the footnotes, Topical Guide, Bible Dictionary, and triple combination index.

"We've found things that have added to the context to better help us understand those revelations," said Church historian Elder Steven E. Snow.

As the Church has been able to learn more and more about its early history through the Joseph Smith Papers project and more, they have learned more about the context in which the revelations of the Doctrine & Covenants took place. For example, James Covill, who was referred to in Doctrine & Covenants 39 and 40, was identified as a Baptist minister. Through historical research, Church leaders have learned his name is actually spelled "Covel," and he was a Methodist minister.

The largest of these changes are explanations that have been added to the Doctrine & Covenants either where there were none or to expound upon ones that were already there.

The introduction to the Doctrine & Covenants has four new paragraphs offering additional historical information, and other slight explanations have been added in other places as well, such as the introduction to Section 132.

Most notable, though, are the introductions added to Offical Declarations 1 & 2--about the touchy Church topics of polygamy and blacks and the priesthood. These explanations offer a landmark in a discourse that is often riddled with conflicting ideas and explanations for past Church practices, both positive and negative. The Church's statement on blacks and the priesthood that precedes Official Declaration 2 reads thus:

“The Book of Mormon teaches that ‘all are alike unto God,’ including ‘black and white, bond and free, male and female’ (2 Nephi 26:33). Throughout the history of the Church, people of every race and ethnicity in many countries have been baptized and have lived as faithful members of the Church. During Joseph Smith’s lifetime, a few black male members of the Church were ordained to the priesthood. Early in its history, Church leaders stopped conferring the priesthood on black males of African descent. Church records offer no clear insights into the origins of this practice. Church leaders believed that a revelation from God was needed to alter this practice and prayerfully sought guidance. The revelation came to Church President Spencer W. Kimball and was affirmed to other Church leaders in the Salt Lake Temple on June 1, 1978. The revelation removed all restrictions with regards to race that once applied to the priesthood.”
When Will These Changes Take Effect?

If you access scriptures online, you will automatically be seeing the updated version of the scriptures, and you can update your Gospel Library apps on your phones and tablets to be able to view the new version.

New editions of the scriptures are currently being printed and will be available in August. You will not need to buy new scriptures, though, Church authorities are quick to emphasize.

"As you need new scriptures you can get new scriptures," said Elder Anderson, "but all the pages are exactly the same page numbers as you have already had. So someone with this new edition or with an older edition, if you turn to page 450 you're going to see the same verses there. . . . It will be very, very, very much like what you currently have." And as most of the changes deal with slight modifications in cross references and punctuation, there shouldn't be any confusion between editions.

The important thing is to remember the purpose of the scriptures and to enhance our appreciation for them.

"Can you imagine anything more important than the scriptures?" Elder Anderson asked. "We who have faith in the Lord Jesus Christ, we can't imagine not having His words and the words of prophets."

See the full list of updates here.See a side-by-side comparison of all the pages of the 1981 and 2013 Doctrine & Covenants changes here. (Note, this is a very large PDF and as such will take a long time to load and may cause difficulties on some browsers or computers.)