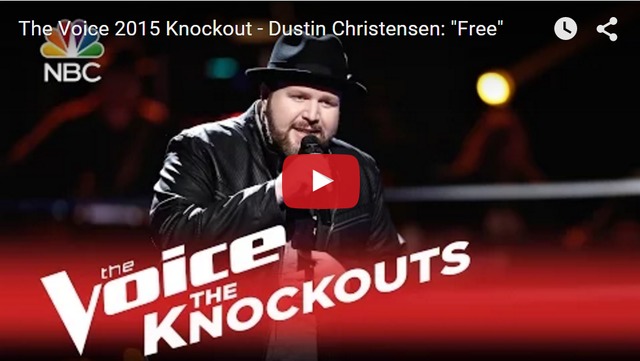 LDS Singer on "The Voice" Makes It to Knockout Round

At the beginning of October, LDS vocalist Dustin Christensen made all four judges on NBC's The Voice turn their chairs with his exciting rendition of "Downtown Train."

Not only surviving but also impressing the audience and judges in the Blind Auditions, Christensen moved on to the Battle Round, going toe-to-toe with his friend and fellow teammate Barrett Baber. Both musicians gave a stellar performance, but ultimately Baber was picked to move forward in the competition, leaving Christensen up for the other coaches bids while also leaving him open to the possibility of being eliminated from the show.

But Christensen would live to sing another day on the show as both coaches Adam Levine and Gwen Stefani put in a bid for Christensen. Ultimately, he chose to join Levine’s team.

On Tuesday, October 27, Christensen appeared on the show again, this time competing against teammate Keith Semple in the Knockout Round. Christensen performed "Free" by the Zac Brown Band, while Semple sang Foreigner's "I Want to Know What Love Is."

Unfortunately for Christensen, classic rock won out over country, and Semple was chosen to move forward in the competition, though Gwen Stefani did tell Christensen, “Your voice is so beautiful and soothing. You don’t really sing, you just tell this story.”