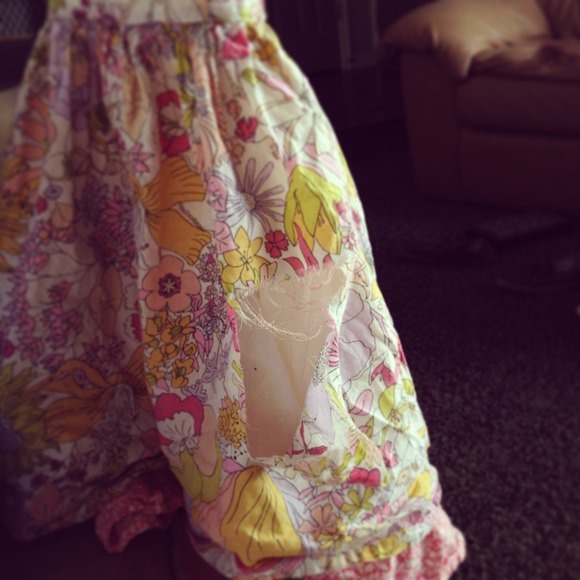 My two girls seem to be quite skilled at driving me crazy and destroying everything they touch, but what kid isn't? I started posting pictures of what motherhood is REALLY like just so I could go back later and laugh, which I do, much, much later. Here's a little taste of what being a mom is all about:

Pipsqueak with pen all over my pretty couch.

I had to write a sacrament talk so I gave the girls some paper, scissors, and glue and told them to "LEAVE. ME. ALONE."

Sometimes you just lose the fight and your kids wear their princess clothes and fox mask to church.

It's about praying that that super long eyelash that only grows when you're pregnant is a false alarm.

Mmm, mmm, mmm. Munchkin ate the other half of this gum found underneath the drinking fountain at church.

These two can’t even keep their clothes on at Temple Square. They are ALWAYS naked.

I can't leave her for a second. This brand new jar of peanut butter quickly became a full body mask. These photos really don't show the extent of her artistic skill, because it was EVERYWHERE. It took me 45 minutes to clean it off of her and the kitchen. I don't even understand—do other children do this?!?!

I took a glorious Sunday nap after church and left Munchkin with her paint. I didn't even care what the consequences would be because I was so tired. She painted her face (and our toilet) like a tiger and growled at all of our friends for the rest of the night.

My husband bought me a lemon tree for my birthday last year and we have been waiting for 10 months to harvest our measly four lemons. Finally, they were ripe! So I made homemade lemon bars for FHE only to have them ruined by little fingers.

Oh, no. They have discovered the baby camera.

Crying inside. My husband and I have only ONE nice ornament for our tree and it's super significant.  For a few years I was lucky enough to play the piano for President Thomas S. Monson and other general authority at their annual Christmas dinner party. As a gift for one of the years I played, I was given this beautiful ornament. It sadly didn't even make it out of the storage box when I heard a crash behind the tree.

[At the Walt Disney Museum] I guess not every Mormon likes Disney after all. They were on the floor half the time, as bored as if I had taken them to DMV.

Ashley Evanson is the author of the "Hello, World" children's book series. She also has a blog called Johnny & Ashley In Real Life, which her children are regular contributors to. She and her family live in San Francisco.