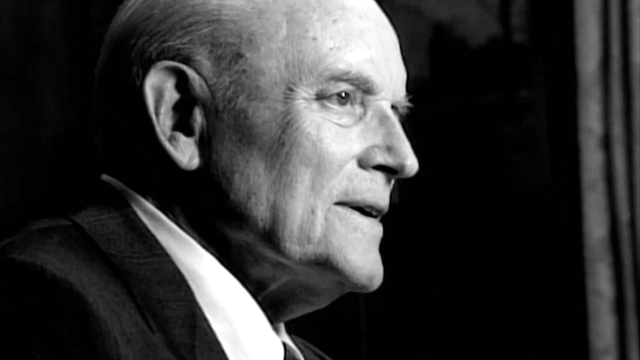 We are so blessed to be learning from the life of President Howard W. Hunter this year in Priesthood and Relief Society. He's an extraordinary man whose life was filled with so many experiences and messages that can change our own.

Here's just one such incident from President Hunter's trip to Jerusalem, a trip that illustrates the depth of peace that can come from living the gospel of Jesus Christ.

In 1989, President Hunter had an . . . experience during which he felt peace in a troubling time. He was in Jerusalem to dedicate the Brigham Young University Jerusalem Center for Near Eastern Studies. Several groups had protested the Church’s presence in Jerusalem, and some had threatened violence. One of the speakers at the dedication was Elder Boyd K. Packer of the Quorum of the Twelve, who later related this incident:

“As I was speaking, there was some excitement in the back of the hall. Men in military uniforms had entered the room. They sent a note to President Hunter. I turned and asked for instructions. He said, ‘There’s been a bomb threat. Are you afraid?’ I said, ‘No.’ He said, ‘Neither am I; finish your talk.’”3 The dedication services proceeded without incident; there was no bomb.

In situations like these, President Hunter trusted in this promise of peace from the Savior, which he often quoted: “Peace I leave with you, my peace I give unto you: not as the world giveth, give I unto you. Let not your heart be troubled, neither let it be afraid” (John 14:27). (Teachings of the Presidents of the Church: Howard W. Hunter)

As President Hunter teaches us, “Peace can come to an individual only by an unconditional surrender—surrender to him who is the Prince of peace, who has the power to confer peace.”