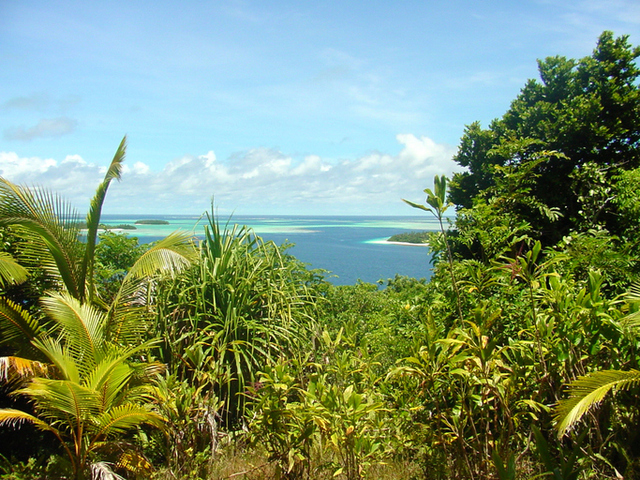 Mormon missionaries first arrived in Tonga in 1891, in the midst of a sea of religious turmoil, landing on the southern island group of Tongatapu. Their journals record vital details that might otherwise have been lost, including stories about their initial meeting with the king of Tonga to seek permission to preach the gospel, their urgent need for housing, and request to the premier of Tonga to build a mission home and school in Mu‘a.

The Samoan Mission had been established in 1888, and William O. Lee, mission president, decided to send Brigham Smoot as presiding elder to Tonga. Smoot first served as a Mormon missionary in Samoa in 1889 with companion Edward J. Wood. Smoot had drowned the second day in Samoa, but Wood restored him to life through a priesthood blessing. Smoot then studied Tongan from January to July 1891, at which time he was asked to open Mormon missionary work in Tonga. He was delighted when he received the call to preside over the Tongan Mission on his 22nd birthday. Smoot’s companion was Alva J. Butler. They were later joined by Brother Olonzo Merrill in 1892.

A key goal for these early missionaries was to learn the native language, which proved difficult. Brother Merrill recorded a resolution the missionaries made with each other to help them in this task: “As we seem to make little progress in the language, we passed a resolution this evening to the effect that three days in every week there is to be no talking in English; but all conversation is to be carried on in the To[n]gan language. Those violating this rule are to translate one passage of scripture from English to To[n]gan and . . . to cook and keep house one day.”

These early missionaries didn’t just focus on learning the language, however. They also made efforts to learn and adhere to many of the unfamiliar cultural practices of the island and started a school to teach English and the gospel. Though many preachers urged their followers not to allow their children to join the school, the youngest son of the premier of Tonga was enrolled—a connection that would later prove to be a blessing for the growth of the Church. 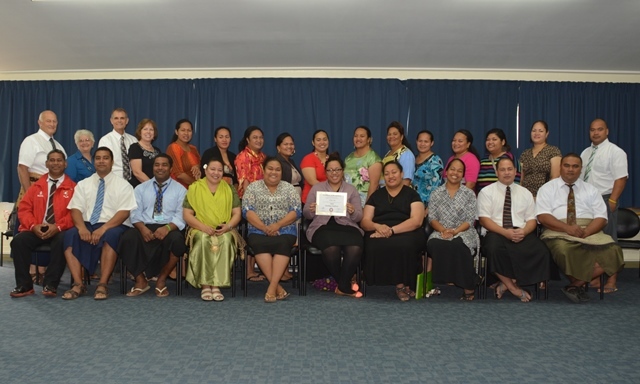 A Baptism and More Opposition

The first Tongan to officially join the Church was a man named Alipate, who was baptized by Elder Smoot on Sunday, September 11, 1892. Though others listened to the missionaries and wanted to join through baptism, the threat of community disapproval by chiefs, family members, and other ministers often proved a stumbling block.

Notwithstanding, the elders marched on and continued in their effort to take preaching tours. Alva J. Butler recalled that these excursions were challenging: “It is quite difficult to get to talk with the people. They have been told so much stuff about us. Many treat us with silent contempt others laugh, mock, and call us names while a few feel to listen and treat us with respect. Indeed a missionary’s life is not always pleasant.” Merrill remembered, “Brother Kinghorn and I started out on a preaching trip to the Fuamotu district, . . . went on to and when they sat down to drink kava we told them our business, read the articles of faith and several passages from the Bible but it did not take our testimony to them we left the village.”

In the dedicatory prayer of the Nuku‘alofa Tonga Temple in 1983, President Gordon B. Hinckley said, “We thank Thee for the missionaries who for many years have come here to bring the glad tidings of the restored gospel. We thank Thee for their faith, for their consecration, for their willingness to face the perils of the sea and long absence from their homes to serve as Thy messengers to Thy people.” Those early missionaries at Mu‘a certainly contributed to concerted efforts to share the gospel with the people of Tonga.

In 1916, the Tonga Mission was formed from the Samoan Mission, and great growth has occurred over the past century. As of 2016, the Church in Tonga has grown to include one mission, one temple, 19 family history centers, and over 63,000 Latter-day Saints—who make up nearly 60 percent of the population. Many more Tongan members also live outside the country. The seeds planted by the early Mormon missionaries in Tonga have certainly brought a bounteous harvest. One planted, another watered, but God gave the increase.

Today, the members of Tonga don’t hesitate to show their love and appreciation for the missionaries, and, as a result, the missionary work there has blossomed.

And though members in Tonga don’t always have much, they give what they can to the missionary efforts in their country—even at great personal cost.

Beyond just taking care of the physical needs of the missionaries, however, members also selflessly care for emotional needs. For example, when Tu‘ikolovatu’s companion began feeling extremely homesick, a member took notice. Though he didn’t have a lot of spare time, this member was sure to treat Tu‘ikolovatu and his companion as his own sons.

“In one family home evening, he told us he doesn’t care where we are from because in his eyes, he’s going to be a father-figure to us and he’s going to help us. People will say they are going to do anything for us. Sometimes there’s stuff that they won’t do, but this family, they never got tired of us,” Tu‘ikolovatu says.

A History of Devotion

The members in Tonga embrace the gospel—largely because they have already been living parts of it through their similar cultural practices.

For example, despite living on islands in the Pacific surrounded by wonderful beaches, the people of Tonga are generally very modest, returned senior missionary Garth Hamblin observes.

“When we [Americans] go to the beach, we take off our pants and our shirts and have our swimming trunks and swimsuits,” he says. “Often [Tongans] have very heavy shorts or a long sleeve t-shirt and go swimming.”

But perhaps the biggest cultural reflection of a gospel belief is the Tongan law to keep the Sabbath day holy. Under this law, buses don’t operate, businesses remain closed, sporting events are not allowed, and even planes may not land at the airport. And most of the traffic on that day consists
of families traveling to and from church.

The people of Tonga place a strong emphasis on family, often living in multigenerational homes and taking great pride in their ancestry. 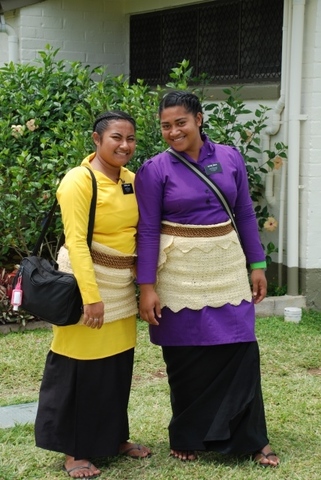 Because they place high value on family and making important life decisions as a family, however, sometimes divisions arise—especially when a family disagrees with a member’s decision to join the Church.

“[A family decision] helps bring us closer together,” Telesia Finau, a returned missionary and native Tongan says. “Sometimes a [difficult] family decision separates them from each other, but it also reminds us that we pray to God, not to people, and how important the Atonement that Christ did for us is.”
Finau adds that no matter how immediate family members react to a decision, however, the ward family frequently rallies around those whose families opposed their decision to join the Church. “[We] try to love that person as much as they can. And we try to help him or her to never feel like they don’t belong,” he says.

Reaping the Blessings of Sacrifice

To attend the Nuku‘alofa Tonga Temple—the only temple in the country—and be sealed together can be a great challenge depending on what part of the country members live in. But it’s a challenge they’re willing to face.

Finau explains, “Once we go to the temple, we find peace knowing that there’s a loving Heavenly Father, that He is there guiding us no matter what and no matter how judgmental people are. That peaceful feeling we have going to the temple kind of refreshes everything.”

On the island of Tongatapu, members in Tonga can walk or drive to the temple in a matter of minutes. But, according to returned senior missionary Stephen Meyers, for those living on the more distant Ha‘apai Islands, going to the temple involves traveling 12 hours by boat, while the trip from more distant islands can take anywhere from 24 to 36 hours.

Finau estimates that a temple trip can cost as much as $300—and more for members visiting from other countries, such as Papua New Guinea.

Despite these challenges, Meyers says the 5 a.m. session at the temple is “always well attended,” as are the other 11 sessions the temple maintains per day.

Members in Tonga don’t just sacrifice for the temple, however. For many families, tithing can also be a sacrifice—but one that is accompanied by rich blessings.

“I am from a big family and so it is not easy for my parents to get what we need for each of us,” Finau says. “One day, my family was broke and my brother was hungry. We did not have food because we did not have enough money. Later that day, the bishopric members came over with food, and we know for sure that it was a blessing from paying tithing,” Finau says.

A Generation of Young Missionaries

Today, a great effort is being made to prepare the youth in Tonga for missionary work in foreign countries. 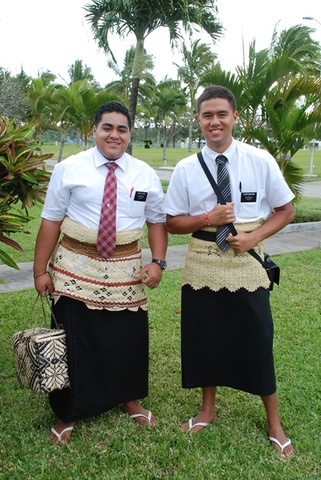 Meyers had the opportunity to help with this while on his mission in Tonga, working to make sure high schools and teachers met the government qualifications and certifications for language training. He recognized that the Church was working very hard to make sure students were fluent in English.

This is especially true at the Church-owned Liahona High School. Founded in 1948, the school is known for its quality education and for helping students to achieve vocational careers as well as to learn English.

Elder Kevin W. Pearson, President of the Pacific Area, made a special visit to the students at the Liahona High School while Meyers was serving. Meyers shares, “He told the students at Liahona, ‘We want you to learn and be proficient in English. Do you know why we want you to be? We want you to be proficient in English because the Lord needs you throughout the world. We need to be able to send you throughout the world to do missionary work.’”

As the country with the largest membership per capita in the world, the members of the Church in Tonga hold missionary service in high regard.

Perhaps Tu‘ikolovatu sums it up best: “[Members] appreciate the gospel a lot in Tonga because they know it brings blessings to their families and they try their best to be the most faithful members  they can be.”

Lead photo from Getty Images. All other images courtesy of Stephen Meyers. 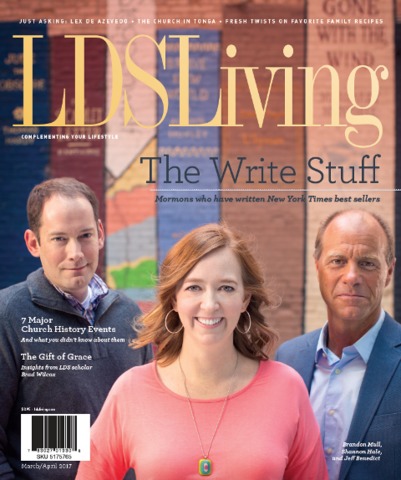 To read more about the members in Tonga, or for other fascinating stories about Church history, LDS New York Times best-selling authors, and more, check out the March/April 2017 issue of LDS Living magazine, available on deseretbook.com.