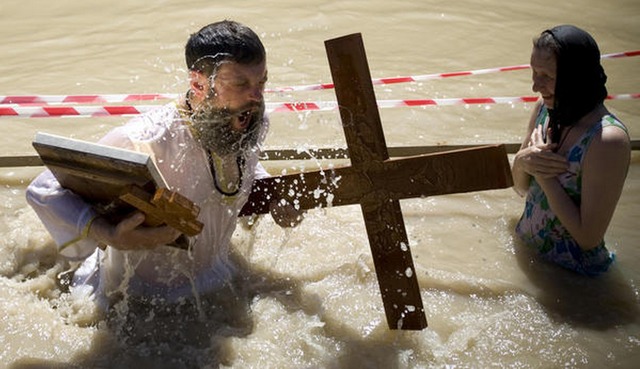 Where Was Jesus' Baptismal Site? UNESCO Weighs In On Debate

For years, Christian pilgrims have waded into the Jordan River from both its eastern and western banks to connect with a core event of their faith — the baptism of Jesus. The parallel traditions allowed Jordan and Israel to compete for tourism dollars in marketing one of Christianity's most important sites.

But now UNESCO has weighed in on the rivalry, designating Jordan's baptismal area on the eastern bank a World Heritage site. The U.N. cultural agency declared this month that the site "is believed to be" the location of Jesus' baptism, based on what it said is a view shared by most Christian churches.

The decision drew cheers in Jordan, where the number of tourists has dropped sharply since the 2011 Arab Spring and the rise of the Islamic State group. Israel has kept silent while a Palestinian official said the western baptismal site, located in an Israeli-occupied area sought for a Palestinian state, should have been included.

The UNESCO decision also raised eyebrows among some scholars.

It "has nothing to do with archaeological reality," said Jodi Magness, an archaeologist at the University of North Carolina at Chapel Hill. "We don't have any sites with evidence or archaeological remains that were continuously venerated from the first century on."