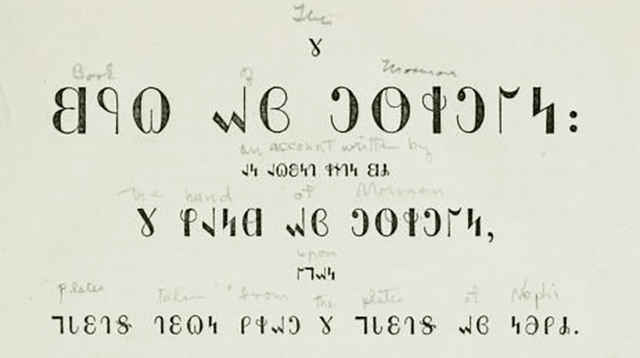 THIRTY-TWO YEARS AGO, WHILE ON a Mormon mission in Florida, amateur cryptologist Scott Reynolds was browsing a public library when he discovered a book with pages printed in a code of symbols he did not recognize. There was no key or explanation, but he copied down the peculiar characters. It would be over a decade until he discovered that the foreign-looking script was a nearly forgotten writing reform experiment called the Deseret Alphabet.

“There was very little information about the DA on the internet back then,” says Reynolds, “but enough that I finally learned what it was and where it came from. I found the first three readers [books of excerpts for language learners] on eBay and purchased them.”

Reynolds decided to create a space for people to learn. He founded a website and multiple online discussion forums.

This alternative alphabet was created more than a century ago and fell into obscurity shortly thereafter, but a modern enthusiast can download several Deseret fonts, translate between Deseret and Standard English directly on the web, or purchase a swath of transliterated paperback classics—from the The Federalist Papers and the U.S. constitution, to works of Shakespeare, P.G. Wodehouse, or Isaac Asimov. Indeed, a far greater number and variety of books are available in the Deseret Alphabet today than ever were in the time its implementation was seriously pursued. Due to its petite renaissance, fans of the popular webcomic XKCD can visit a website dedicated to transliterating each new post. And the alphabet was recently the official written language of the Republic of Molossia, a self-proclaimed micronation in Nevada.