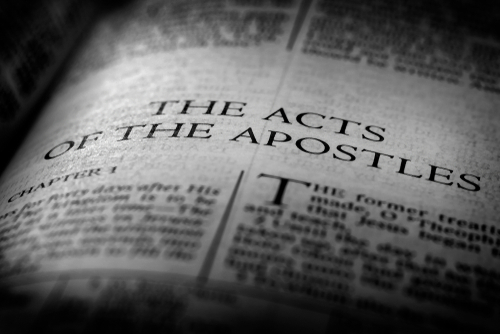 Don’t forget to record your impressions and read the ideas outlined in the new Come, Follow Me manuals on ChurchofJesusChrist.org.

Candidates to fill the vacancy in the Quorum of the Twelve are narrowed to two, apparently from among several possibilities. The apostles prayed, inspiration came from the Lord, and Matthias was chosen and ordained (this is the only mention of him in the New Testament). The name Matthias is in Hebrew Mattityahu, or in English, Matthew, meaning “gift of God.”

These ideas and topics are compiled from Come, Follow Me and have been adapted for specific situations. Check out the manuals online for more ideas, or come up with your own as you study!

There are several stories of the disciples performing miracles that are found in the first chapters of Acts. One story in particular in the first part of Acts 3 recounts the story of a man who asked Peter and John for money but was healed instead. As you ponder this story, you might discuss together ways that the Lord has blessed you or your family in ways that were different than you had asked for or expected. Perhaps you can even make a list of current ways the Lord is blessing you in different situations.

One phrase found in this week’s readings is “pricked in their heart.” As you study this week, you might focus on what this phrase means and how you have felt your heart be “pricked” as you read the scriptures, listen to general conference, or attend church. Perhaps you can review some notes or think of one prompting in particular that you have had recently that you can act on this week.

For families with young children:

We read in the first part of Acts that after Christ left the earth, He left the care of the Church in the hands of Peter and the other apostles. This could be a good principle to teach your young children. Perhaps you could review who the current prophet and apostles are using picture charts, or play a matching game using pictures of the current apostles and then share one thing they taught recently every time someone gets a match.

For families with teens:

In this week’s readings, we learn that new members of the Quorum of the Twelve were called after Christ’s ascension, including Matthias (Matthew). As you read, you might consider writing out or having family members explain the process by which these ancient apostles were called. You could then compare it with the way the current apostles and prophet are called (most recently, Elder Gong and Elder Soares). This would also be a good opportunity to bear your own testimony of the prophet and apostles and the role of revelation in their callings, or give your family members an opportunity to do so. You could even give everyone time to write down their own testimony of the Savior and put it in their scriptures or a journal.

Stay in the loop on Come, Follow Me discussions and insights throughout the week by following the Brightly Beams Instagram account, or check out this week's related Come, Follow Me FHE lesson: Don’t Look Around, Look Up!.