Vincent Price as Joseph Smith, Mary Astor as a prophet's wife, and a host of other Hollywood icons portraying Church figures fill the credits for the1940 film Brigham Young. 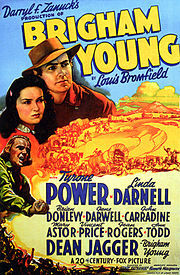 Among them is Dean Jagger, an Academy-Award winner best known for his role as General Major Tom Waverly in White Christmas. When Jagger played the prophet Brigham Young in the 1940 film of the same name, little did he know his interaction with the LDS Church was far from over.

► You'll also like: "7 Mormons with Stars on the Hollywood Walk of Fame"

Later in his life, Jagger married Mormon Etta Mae Norton and later became a member of the Church himself.

The film Brigham Young depicts the troubled times in the Church following the martyrdom of Joseph Smith as the new prophet leads the Saints out West to settle in Salt Lake City. Interestingly enough, Twentieth Century Fox consulted with Church historians and President Heber J. Grant during the making of the film.