Baptized in 1845, Ephraim Knowlton Hanks was among the first rescuers to meet the Martin and Willie Handcart Companies in 1856.

One night that same year, Ephraim heard a voice call his name when he was preparing to go to bed. Three times the voice came to Ephraim, telling him the Saints stuck on the plains were in trouble and asking him to help them. 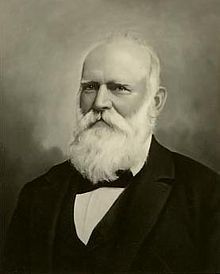 Three times Ephraim responded with the same answer: he would go and save the Saints if he were called. Just two days later, Brigham Young stood up in general conference, calling for volunteers to help the desperate Willie and Handcart Companies.

The very next day, Ephraim set out on his journey. While facing the same snow storms that had ravaged the Saints, Ephraim was forced to abandon his wagon and continue on horseback.

During this time, Ephraim described the many miracles he experienced while relieving the Saints:

"As I was preparing to make a bed in the snow with the few articles that my pack animal carried for me, I thought how comfortable a buffalo robe would be on such an occasion, and also how I could relish a little buffalo meat for supper, and before lying down for the night I was instinctively led to ask the Lord to send me a buffalo.

"Now, I am a firm believer in the efficacy of prayer, for I have on many different occasions asked the Lord for blessings, which He in His mercy has bestowed on me. But when I after praying as I did on that lonely night in the South Pass, looked around me and spied a buffalo bull within fifty yards of my camp, my surprise was complete," Ephraim wrote in his journal.

The next morning, Ephraim found yet more buffalo, and the meat proved not only a blessing to the Saints when he reached them on the trail, it also fulfilled prophecy.

"A prophecy had been made by one of the brethren that the company should feast on buffalo meat when their provisions might run short; my arrival in their camp, loaded with meat, was the beginning of the fulfillment of that prediction," he writes.

About that first night he met the handcart companies, Ephraim says the sight "can never be erased from my memory. The starved forms and haggard countenances of the poor sufferers, as they moved about slowly, shivering with cold, to prepare their scanty evening meal was enough to touch the stoutest heart."

That night, Ephraim was given the charge of helping to lay out a man who a leader in the camp said had died just moments before.

"I immediately stepped back to the camp fire where several of the brethren were sitting and addressing myself to Elders Grant, Kimball and one or two others, I said, 'Will you boys do just as I tell you?' The answer was in the affirmative. We then went to work and built a fire near the tent which I and Elder Tyler had just visited. Next we warmed some water, and washed the dying man whose name was Blair, from head to foot. I then anointed him with consecrated oil over his whole body, after which we laid hands on him and commanded him in the name of Jesus Christ to breath and live. The effect was instantaneous. For the man who was dead to all appearances immediately began to breathe, sat up in his bed and commenced to sing a hymn."

Ephraim's inspiring faith and sacrifice to help those in need inspired LDS director T.C. Christensen to turn his life and these events into a film titled Ephraim's Rescue.