While Mormons have become football legends, made history as wartime heroes, sailed oceans as captains, dominated ping-pong competitions, and even run hundreds of miles, there's no one Mormon, or one person for that manner, who has done it all.

But in the 1994 blockbuster Forrest Gump, which tells the story of a slow-witted man with a heart of gold and the childlike optimism, you might be surprised to see an image of the man known as "the real Forrest Gump." During the scene in the movie when Tom Hanks's character receives a Medal of Honor for his bravery in Vietnam, Hanks's head is superimposed over real footage of Latter-day Saint Sammy L. Davis (the man Forrest Gump is based on) receiving the Medal of Honor from President Lyndon B. Johnson. 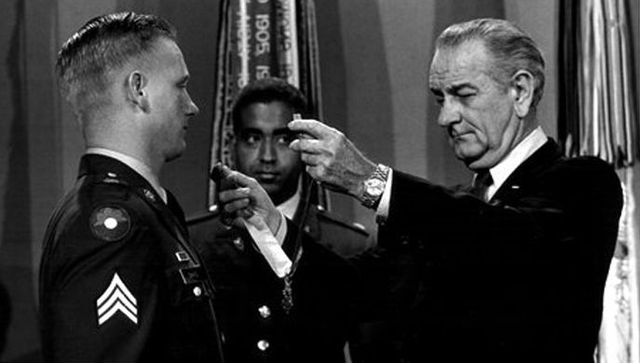 But Davis's service during the Vietnam War is astonishing enough to deserve a Hollywood film all its own. On November 18, 1967, shortly after his 21st birthday, Davis and his unit were helicoptered into a base near Cai Lay. Just after midnight, a heavy attack of mortars began raining down on Davis and his men as over a thousand Viet Cong soldiers launched a vicious ground assault to overrun the base.

Sgt. Davis immediately jumped on a machine gun, providing covering fire for his gun crew until the team took a direct hit from a recoilless rifle. The hit blasted Sgt. Davis from his gun into a foxhole, but he returned to his crew's howitzer, now ablaze and under constant gunfire, and fired a shell. The howitzer rolled back, sending Davis to the ground. Undeterred, Davis returned, loaded, and fired four more shells at the enemy despite getting injured by a mortar explosion.

When there were no more rounds or shells left to fire, Sgt. Davis heard GIs, cut off from the rest of the soldiers, yelling from the other side of a river near the base. Though he didn't know how to swim, Sgt. Davis grabbed an air mattress and paddled across the river. There, he found three wounded soldiers, one with a serious head wound that could quickly turn fatal. While another GI helped the man with the head wound, Davis provided covering fire. He then took the other two injured men across the river to safety before joining the fight once again.

Like Forrest Gump, Sgt. Davis was later wounded when friendly fire hit him in the back and buttocks. But unlike Forrest, Davis never showed the president the places where he was wounded. While recovering in the hospital, Davis learned he was going to be sent home due to his injuries, so he petitioned to be allowed to stay in Vietnam to do what he could. The petition was granted.

On November 19, 1968, Davis received the Medal of Honor for his bravery in putting the lives of others above his own.