On March 18, 1998, LDS missionaries Travis Robert Tuttle (from Gilbert, Arizona) and Andrew Lee Propst (from Lebanon, Oregon) were doing their normal mission rounds and knocked on the door of a man who had asked some questions regarding the LDS Church.

That's when the two elders were bludgeoned with a metal baton, handcuffed, tied up, and left with tape covering their eyes and mouth.

"I had no hope of ever walking out of there alive," Propst told the Deseret News. The missionaries' abductors kept them in a small room for five harrowing days, not telling them about the $300,000 ransom note they had delivered to Church officials in Russia or the work the Church and U.S. government were undertaking to save the two young elders.

"I remember thinking, 'I need to get out of here or I will not live to see tomorrow,'" Tuttle told the Deseret News. Over the five days, the missionaries endured psychological and physical abuse, Tuttle even experiencing nerve damage from wearing tight handcuffs.

Every day the missionaries prayed fervently to God, and they continued to talk with and try to befriend their captors. One night, a captor arrived at the apartment drunk, saying he planned to release the missionaries as he forced them in the back seat of a car and drove for 45 minutes.

"There wasn't a word spoken that entire time. We thought we were being taken to our final resting place," Propst told the Deseret News. But then they were forced out of the car into the snow and left behind. The first thing the missionaries did after hugging was to say a prayer of gratitude. 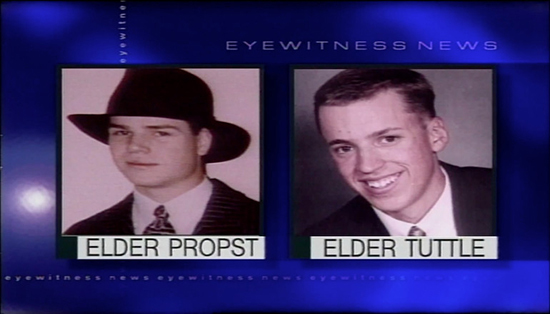 Now, Propst and Tuttle are both married with children of their own who plan to serve missions for the Church. And their real life experience, captured in The Saratov Approach, has inspired thousands both inside and outside the Church.

"Every missionary gets a chance to change lives, we just got to do it on a bigger scale," Tuttle told the Deseret News. "I took a beating for a greater cause."

"I wouldn't change anything," Propst adds. "It sounds kind of crazy, but I think being kidnapped was one of the best experiences of my life . . . to learn those life lessons that most 19-year-olds don't get a chance to."