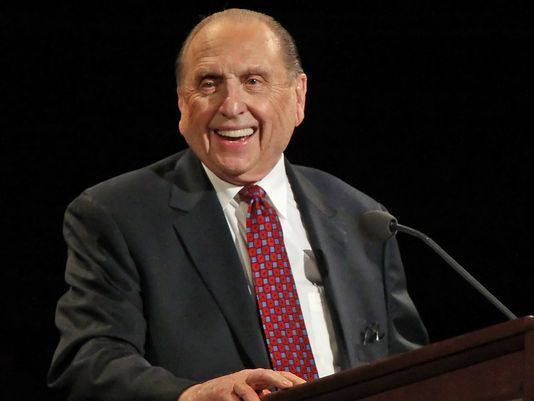 "He Was Surrounded and Born Up by Angels": Apostles Give Touching Tribute to President Monson at His Funeral

To a full Conference Center, President Thomas S. Monson's daughter, Ann M. Dibb, and three apostles—President Dieter F. Uchtdorf, President Henry B. Eyring, and President Russell M. Nelson—spoke of this remarkable man and his "legacy of love and service" during his funeral on January 12.

During the service, President Eyring shared one of President Monson's favorite scriptures, D&C 84:88: "And whoso receiveth you, there I will be also, for I will go before your face. I will be on your right hand and on your left, and my Spirit shall be in your hearts, and mine angels round about you, to bear you up."

The promise in this scripture made our prophet "optimistic" and "courageous" despite perilous or dangerous tasks he faced, President Eyring said. "He felt no fear. He believed that the Lord went before him and that angels were placed around him to bear him up. That proved to be true."

President Eyring shared his experience at President Monson's bedside hours before his death. "As I looked on his face, I felt that the Lord's promise was being fulfilled. . . . He had been surrounded and born up by human angels, and perhaps more," he said, adding that he felt sure the resurrected Lord waited on the other side of the veil to meet President Monson with outstretched arms.

Ann M. Dibb testified of the presence of heaven in her father's and family's lives, saying, "I know we have had angels around us to bear us up."

Sister Dibb said her father's legacy was that of love and service, and he would often encourage others to bring a "bright spot" in their souls by uplifting another. "President Monson constantly focused on the individual," President Nelson shared.

Through his half a century of service and sacrifice, President Monson understood his role as an instrument in the Lord's hand. Sister Dibb shared, "Although my father was a prophet, he knew he was not perfect" and that he humbly relied on Jesus Christ for strength.

"I love the Savior Jesus Christ and know He loves me," President Monson testified, according to President Uchtdorf. That love and strength gave this devoted disciple of the Lord the faith and courage to continue his work in the Church until his passing.

"His spirit has gone home to God our Father in Heaven who gave him life," President Uchtdorf said.

President Eyring added, "he gave his all in the service of the Lord."