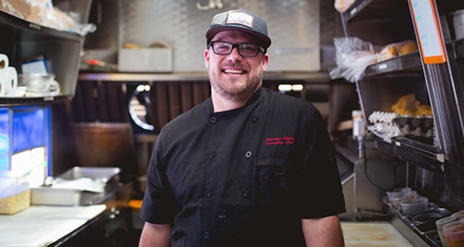 "The only time I had prayed was if I was getting pulled over or arrested," Nick Watts aid after he met with the missionaries. "I was like, ‘What do I pray about?’ I remember praying and just saying that I was sorry. There was a long list of things I needed to say sorry for. I remember praying and all of a sudden I couldn’t speak, I couldn’t think, I couldn’t move, I could only laugh—that’s it. I felt this overwhelming feeling of happiness and I was like, ‘Oh, my goodness. This is it. This is what I’m supposed to be doing.’”

Watts started cooking years ago when his parents had addiction and substance abuse problems, leaving him with the responsibility to provide for his brother and himself.

“(Cooking) became second-nature to me. It was the one thing I was subpar at doing, so I just got jobs cooking in restaurants and worked my way up through the ranks," the Arizona native said. "One day, I was tired of cooking other people’s food, so I opened up my first food truck."