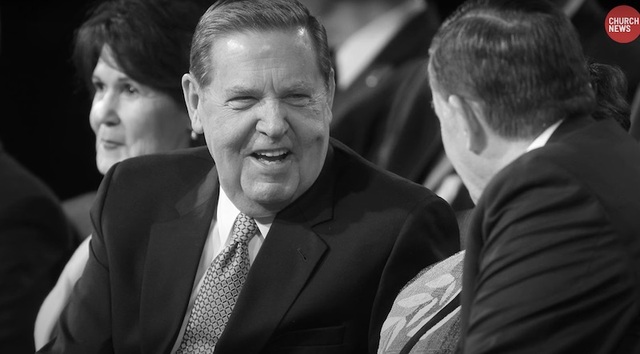 ‘I am giving my life for the Church’: Elder Holland shares his testimony in new video

Elder Jeffrey R. Holland of the Quorum of the Twelve Apostles declared his testimony in a recent Church News video.

The video shows footage of Elder Holland serving in his calling as a leader of the Church, from speaking at the BYU Jerusalem Center to sitting alongside President Thomas S. Monson to joining his fellow apostles at the Rome Italy Temple dedication. In the video, Elder Holland shares how much his integrity means to him and testifies that he believes this is “God’s very truth.”

“I get up every morning saying not ‘How can I pretend,’ not ‘How can I act like this is true?’ My plea every morning of my life is, ‘How can I convey what I know to be more true than anything on the face of this earth? How can I convey to some person, or persons, the reality of the divinity of the Lord Jesus Christ, the fact that God lives, that the heavens are open?’ I have a commission to stand by the Savior of the world, to defend Him and defend the rock that He is,” he says in the video.

Additionally, Elder Holland speaks about the pandemic and how it has been a sobering and frightening time for many people due to its impact on people’s health, finances, and social interactions. But fortunately, he says, it is also a time to turn to God.

“I hope that one thing we’ve all done is come closer to God, that we know that He does not move. He is not subject to pandemics. He can not only cure that problem, but He can cure every other problem in our lives,” Elder Holland testifies.

► You may also like: ‘Life has always been a little messy’: Elder Holland addresses fear of the future

The Apostle concluded by testifying of the Prophet Joseph Smith, Hyrum Smith, and the truthfulness of the Book of Mormon. Just as Joseph and Hyrum gave their lives for the Church, Elder Holland says, he is doing the same today.