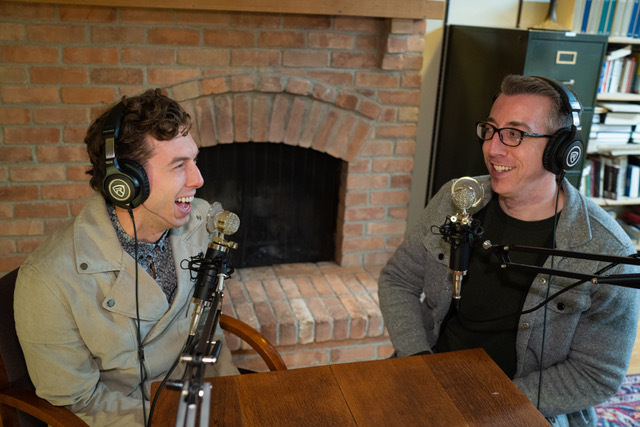 ‘I’ll never forget the joy I felt’: Charlie Bird on seeing Ben Schilaty’s new book ‘A Walk in My Shoes’

A few weeks ago, I walked into Deseret Book and was overwhelmed to see a large poster declaring “You are Loved” displayed proudly over two books by gay authors. As a member of The Church of Jesus Christ of Latter-day Saints who has struggled to find resources, hope, and visibility within my community, this was a visual representation that brighter days are ahead. It was exciting and surreal to see my own book there on the shelf, but I was especially moved to see which book sat next to mine. It was the inspirational new release, A Walk in My Shoes by Ben Schilaty. Seeing our books together made me reflect on how our paths initially crossed and how knowing Ben has made me more like the Savior. 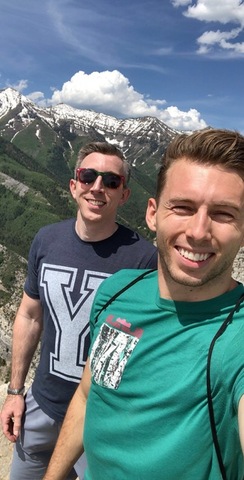 As a scared, skeptical, closeted, gay Latter-day Saint, my early association with Ben Schilaty proved invaluable. I first met him at an LDS/LGBTQ+ support conference in Provo, Utah. I’m sure I looked like a lost puppy, wandering alone with a “no photos” label displayed beneath my nametag. My goal was to lay low, attend a few breakout sessions, and leave before anyone really noticed I was there. That plan was destroyed when Ben saw me roaming the hallway and materialized out of thin air. He introduced himself with an enormous smile and coaxed me into conversation. Upon learning I was an undergrad at Brigham Young University, he told me he was a Spanish professor and excitedly invited me to lunch.

A few months later when I was invited to be part of an LGBTQ+ inclusion working group on campus at BYU, Ben was there at the first meeting. He remembered my name and welcomed me with that same bright, optimistic attitude. For the next few months, we met with campus administrators to brainstorm ways to make BYU safer for LGBTQ+ students. This was a fundamental growth period for me, and Ben became my trusted mentor. As I dealt with consequential questions of faith and sexuality, the confusion of coming out, and how to move forward, Ben listened and offered acceptance and love. He made a habit of driving me home from those meetings just to check in. He was a college professor pursuing a fourth degree while serving on his stake high council, but still willingly spent free time ministering to me, often sitting in the parking lot and talking with me late into the night.

In the years since I have gotten to know Ben well. He loves cacti, listens to Disney movie soundtracks, and takes a weekly tap-dancing class. He collects magnets from travel destinations, started a jump rope club, and speaks with impeccable grammar. A few months ago, when we had a brief stint as roommates while my apartment was renovated, I saw how he listened to general conference talks each morning and never missed a day writing in his journal. Now that I know him so well, I realize I wasn’t the only “scared, lonely BYU gay” Ben was helping. He has dedicated his life to ministering to others. Being an LGBTQ+ member of the Church can be a very isolating, lonely experience. In many instances, it’s still taboo to talk about, even though LGBTQ+ individuals are in our wards, classes, and often members of our own families.

There are so many questions involved in reconciling membership in the Church with being gay. For years, Ben has offered his voice as a point of reference for those who feel they don’t have a place because of the way they were born.

I was among the lucky few who were able to read Ben’s book before it was released. In fact, as we were each working on our respective books, we often turned to each other for guidance and feedback. There was a time when we thought Deseret Book would only publish one of our manuscripts, so we had a conversation about how to deal with our competing projects. Ben asked me how I would feel if my book never made it to print. I said, “Ben, we’re on the same team. I hope whoever has the best jump shot gets the ball.” I really meant it, but I was prepared for him to feel differently from his vantage point—he had been in the space for much longer and had dedicated so much more time and energy to helping LGBTQ+ Latter-day Saints. I’ll never forget the perfect combination of sass and humility in Ben’s reply: “Well, I wouldn’t have used a basketball analogy, but I agree completely. Whichever book can heal the most hearts is the one I want on the shelves.”

► You may also like: What ‘Harry Potter’ taught this Latter-day Saint about true friendship that gave him the courage to come out to his friends

Ultimately, both books were selected for publishing, because both can change lives and heal hearts. In many ways, our books are companions Ben weaves years of Church membership and life experience in his stories in a way that builds empathy and faith. We both recount many shared feelings and experiences, but each adds a different witness to the divinity of our creation and a need for LGBTQ+ individuals to have visible love and support from Church members. As it turns out, rivalry was never in our cards.

I continue to grow from Ben’s testimony and wisdom as a co-host of the Questions from the Closet podcast. Each week we are joined by a guest to discuss a question we are commonly asked as LGBTQ+ Latter-day Saints. Some of the questions come from straight members of the Church, such as “How can I be an ally while supporting Church teachings,” and “How do I navigate the Family Proclamation.” Many others come from LGBTQ+ individuals themselves, including questions like “How do I reconcile my patriarchal blessing,” “How should I come out to my family,” and “Is there a place for me in the Church?” The Q&A format allows us to highlight diverse voices while discussing the uncharted, challenging, everyday questions that surround the LGBTQ+ religious experience. Recording these podcasts with Ben is almost always the highlight of my week.

What began as a student/mentor relationship has become a partnership as Ben and I tackle the complicated territory of being gay members of the Church. We often joke about how we feel like mission companions as we record podcast episodes, minister to LGBTQ+ Saints, and prepare for firesides. I’ll never forget the joy I felt seeing our books on the shelf next to each other, or the honor I feel that my name is so often associated with his. Ben has dedicated his whole life to building bridges of understanding, strengthening Zion, and edifying the kingdom of God. I feel extremely grateful for his positive voice. In a space that often feels dark and overwhelming, his friendship and selflessness helped me find my own.

In this new book, Ben Schilaty, a licensed therapist and BYU Honor Code administrator, shares questions he is often asked which he answers using stories from his life and gospel principles. Some of those questions include: Were you born gay? Why do you stay in the Church? Why don’t you marry a woman if marriage is about more than sex? A Walk in My Shoes gives readers a glimpse into the life of a single, gay, active Latter-day Saint and provides examples of how they can support and minister to their LGBTQ loved ones. Available now at DeseretBook.com.