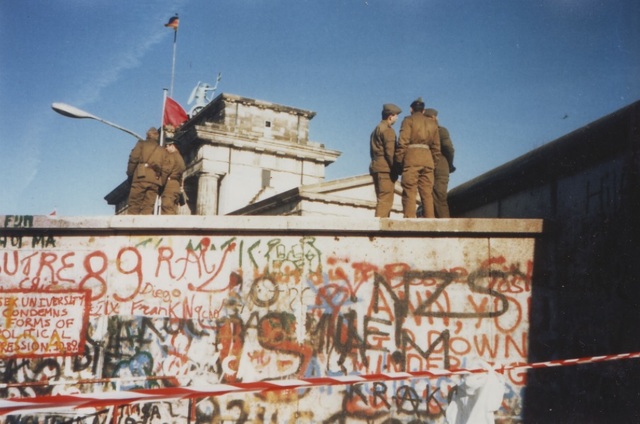 In 1960, I was living near Hamburg in West Germany and was called to be the mission YMMIA president. Half of the members of our mission lived in East Germany, which necessitated having counterpart Young Men’s and Young Ladies’ presidents serving in the same capacity in East Germany. Because the Church members were scattered over a large area, we made a special effort to plan as many activities as possible that could be attended by all the youth of the mission. This presented some problems peculiar to our mission, since half the mission was in West Germany and West Berlin, and the other half was behind the Iron Curtain. It was impossible to hold any activities in the eastern sector, so we scheduled all of our programs in West Berlin so that the East Germans could also attend. They could easily board a subway in East Berlin, ride across the border into West Berlin and attend the meeting, then return to their homes without difficulty.

Shortly after I was called to this position, we began planning for our most important and largest activity of the year, which was to be a youth conference to be held in West Berlin during the Easter holiday. I began corresponding with the Young Men’s and Young Women’s presidents in East Germany and managed to complete all the arrangements for the conference by mail.

The conference was a tremendous success—very inspiring and very enjoyable. For me, the most interesting part on the program was a musical number by a very attractive and talented young lady—the Young Women’s president from East Germany with whom I had been corresponding.

I immediately took advantage of the first opportunity to become acquainted with Gisaliela and was even more impressed with her as I got to know her. During the months that followed, our correspondence continued, and before long we began meeting in West Berlin whenever possible. We began to make plans for our future together and made the necessary unauthorized arrangements for her to come to Hamburg to meet my family during her vacation. Gisaliela’s mother was to accompany her to East Berlin on Tuesday, August 15, where they would spend the night with her brother before continuing on to West Berlin to pick up their airline tickets for Hamburg.

The Sunday morning before Gisaliela was due to arrive, Mother and I attended church services in Hamburg as usual, but the priesthood meeting did not proceed as usual—it was announced that the Berlin Wall had been put up during the night and all traffic between East and West Berlin had been terminated! I was heartsick. The girl I wanted to marry was in East Germany and she would not be permitted to leave. This meant that we could not be married as we had planned.

I was so upset by this news that I decided that I would leave immediately for West Berlin to see if there was something that I could do to make arrangements for Gisaliela to leave East Germany. Knowing full well the futility of trying to deal with the Communist-controlled government, Mother told me that there was no point in my going to Berlin, for she was sure that there was nothing I could do.

I was very discouraged and dejected that Sunday morning as Mother and I knelt in prayer and asked the Lord for his help. We hoped, and prayed fervently, that somehow the Lord would help us so that Gisaliela and I could be reunited.

I was so disheartened that I couldn’t concentrate on what any of the speakers had to say or on the lessons. I returned home and found that a telegram from Gisaliela was waiting for me. I couldn’t believe it—she was in West Berlin! It was unbelievable, incomprehensible! She was not due in West Berlin for several more days!

The following Friday Gisaliela arrived at the Hamburg airport. She then told me the following story of how she came to be in West Berlin on that Saturday afternoon a few hours before the Berlin Wall went up:

“Saturday morning I was busy preparing for a district meeting when my father came into the room and said, ‘I want you to leave for West Berlin today.’ I replied that Mother and I had made all the arrangements to leave on Tuesday, and besides, I had to prepare for the district meeting, but my father insisted that we leave for West Berlin immediately! When I asked for a reason why we should leave early, his only reply was that he didn’t know why—he just knew that we should leave as soon as possible.

“I couldn’t understand this—it was so unlike my father to irrationally and illogically make this type of decision. I asked him again for a good reason and he said, ‘I can’t give you a good reason. I just have this uneasy feeling and I feel impressed that you should leave now for West Berlin.’ He refused to discuss the matter further and told my mother that she was to leave with me and cautioned us not to make any stops along the way.

“He was so determined that Mother and I decided to do as he asked. We packed our bags and were on the next train to Berlin. We found out later that this was the last train we could have taken to Berlin. There were no more tickets sold after that train departed.

“We had previously planned to spend our first evening in East Berlin with my brother and in a day or two cross over into West Berlin and pick up our airline tickets at a friend’s home. For some reason, we decided to continue on to the friend’s house to pick up the tickets, with the intention of returning to East Berlin that evening and spending the night. However, when we picked up the tickets our friend suggested that we spend the night, so, quite contrary to our plans, we accepted the invitation and spent the night in West Berlin.

“You can imagine the shock we experienced when we awoke the next morning and found that the Berlin Wall had gone up during the night and the border had been closed. Even now, it’s hard to comprehend that such a thing could actually happen. I’m so very grateful that my Heavenly Father inspired my earthly father to have me leave the day before the wall was constructed. I’m also thankful that I was obedient and listened to his inspired advice.

“Mother, of course, wanted to be with my father, who was the branch president, so she returned to East Germany that morning. We parted with heavy hearts, not knowing when, or if ever we would see each other again.”

When Gisaliela related her experience to me, I knew that the Lord had opened the way for us to be married and that our marriage would be very special, and it has been.

The Lord has truly blessed us and allowed us to be brought together by forces that cannot be explained by human powers. The power of the Holy Ghost to guide and inspire each of us is real. Gisaliela and I can bear witness that this is so, for our lives have been altered dramatically by obeying the promptings of the still small voice. A miracle was truly performed in our behalf.