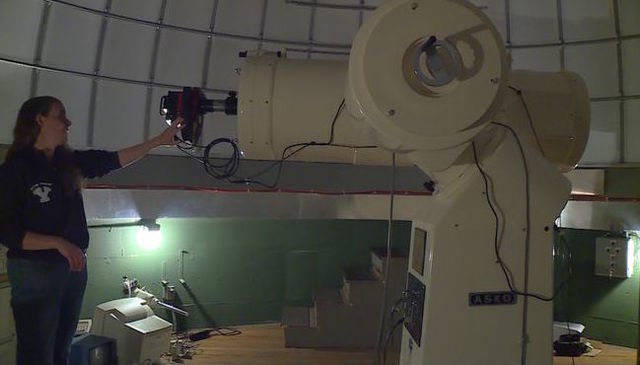 "Like an Adventure": BYU Professor and Her Students Discover a New Planet

Associate Professor Dr. Denise Stephens and her students recently discovered a planet larger than Jupiter about 1,300 light years away.

Even on a rainy night, there's no shortage of activity under the dome.

On this night, the dome stays closed. With clouds blanketing the sky over the Orson Pratt Observatory, there isn't anything for Dr. Stephens' telescope to see.

Nevertheless, she's still at work. In between teaching classes and running her kids to dental appointments or soccer games, she makes the time to stop in to examine some data. To her, it's not just work—like many astronomers, her stellar obsession began when she was a child.

"My dad had a telescope he bought when I was about eight," she said while sitting in the dim light of the observatory, speaking loudly over the noise of rain pelting the observatory's dome. "I do remember being five or six and getting a picture book of the moons of Jupiter, with Io and all these volcanos, and being like, 'This is really fascinating.'"

Jupiter beckoned. As a young girl, she didn't even know astronomy was a potential career path. But as she grew, she learned she had an affinity for physics. That didn't just open up a world—it opened up an entire universe of possibilities.

"You have to really love physics and math," said Stephens. "I spent four years as a physics major, and my Ph.D. is in astronomy. Almost every astronomer has a graduate degree in astronomy."

Despite the lure of numbers and equations, operating a telescope is still where she feels at home.

"It's almost like an adventure," Stephens said. "I still get a big grin on my face when I do this."

But the conditions here aren't ideal. In nearly every populated area, light pollution is a major issue. On the campus of BYU, the lights of Provo blot many of the dimmer stars, meaning the main purpose of the school's telescope was simply teaching students how to use one.

Despite the challenges of her location, Dr. Stephens decided to see how far she could push that telescope.