In an unprecedented move, Elder John H. Groberg and the producers of The Other Side of Heaven 2 have teamed up with Megaplex Theatres in a statewide push to re-release their movie at half price starting Labor Day weekend as a fundraiser for the Liahona Scholarship Fund, which provides tuition and school supplies for Tongan schoolchildren.

In addition to lowering ticket prices to five dollars for every show starting Friday, August 30, Megaplex and the filmmakers are donating a portion of box office proceeds from The Other Side of Heaven 2 to the scholarship fund as well.

"I grew up in Rose Park, and I know what it’s like to not be able to afford a movie ticket,” recounted renowned PGA golfer Tony Finau. “I am so grateful to Megaplex and Elder Groberg for partnering with each other to make it possible for just about everyone to see this inspiring movie regardless of their financial situation. And I’m grateful they are also sharing the proceeds with the poor children of my home country."

“Our movie has been seen by so many good people over the last two months,” stated Elder Groberg, “but we realized that many of the people who would be most inspired by its uplifting message—young families and the underprivileged—haven’t been able to afford to come. So we decided to do something about it.”

That “something” included reducing ticket prices to at or below break-even levels and donating a portion of each ticket sale in cash to the Liahona Scholarship Fund.

"In essence we have written the schoolchildren of Tonga a blank check,” explained the producer and director of the movie, Mitch Davis.  “It is now up to the Utah movie-going audience to decide how much we are able to donate to the Liahona Foundation.  The more tickets we sell in coming weeks, the more scholarship funds we will be able to provide." 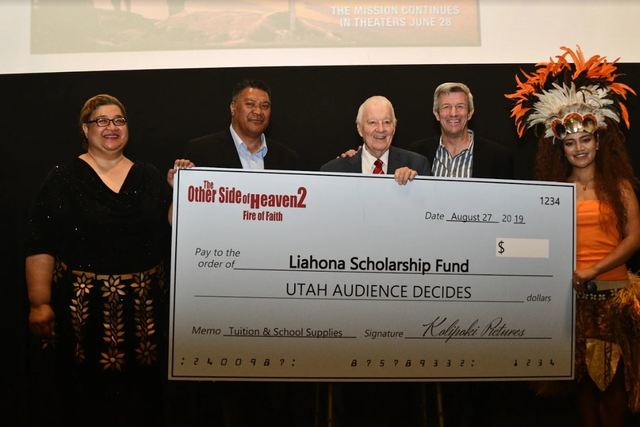 “None of this would have been possible without the generous support of the great people at Megaplex,” Elder Groberg said. “They have just been magnificent partners in sharing our vision of the positive role this movie can play in the world. Although it’s a big, epic film that deserves to be seen in a theater, it has never been a financially driven project for any of us.”

“We are so grateful to Elder Groberg for giving Tonga yet one more gift,” said Millie Vunipola, chairperson of the Utah Chapter of the Liahona Alumni Association. “Many large Tongan families living in Utah will now be able to afford to see their story on the big screen. I hope many palangi (white) families will too. It is a movie with a powerful, pure heart.”

► You'll also like: Why The Other Side of Heaven 2 Is Worth Seeing in Theaters

Elder Groberg agreed, summarizing, “When good people do good things for good reasons, nothing but good can come out of it.”

The Other Side of Heaven 2, which follows the story of Elder John H. Groberg as he returns to Tonga as a mission president with his family, has been the result of many miracles.

Eighteen years seems like a long time to wait for a sequel, but that’s how long it has taken Elder John H. Groberg and others to convince director Mitch Davis that it was now or never. “I said ‘no’ repeatedly for years,” Davis confesses. He says there were two main reasons he resisted. First, he didn’t want to make a cheap follow-up to a big first film and besmirch Elder Groberg’s story. Second, he knew the first film was made with no dreams or aspirations of financial gain, and he didn’t want to take away from the spirit of the second film by making it only to earn some money. However, Davis says, “A couple years ago John and Jean had me up for lunch with my wife. I thought it was just a social visit . . . [but] at the conclusion of lunch, [Elder Groberg] said, ‘Mitch, I thought maybe when President Monson died, he would become less insistent about making the second book into a movie. That is not the case. . . . I’m not getting any younger, Mitch. And neither are you. It’s time.’”

The film—which includes violent storms, persecution, and the parallel stories of two families struggling to keep their sons and their faith alive—is an epic and uplifting story the whole family will love.