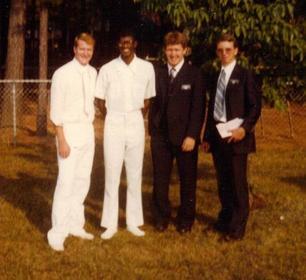 'Partying frat guy' to faithful Mormon: The rest of the story

I joined the LDS Church less than three weeks after my first encounter with two Mormon missionaries, who I initially suspected were regular salesmen. It's a story I shared in my previous column.

And now, as Paul Harvey used to say, here is “the rest of the story.”

My quick and seemingly miraculous conversion from cynical, narcissistic, partying frat guy and DJ to faithful Mormon has roots in something my maternal grandmother taught me when I was a young boy.

On one occasion, I witnessed her invite representatives of the Jehovah’s Witnesses faith into her home and then buy a "Watchtower" magazine from them. When I asked her why she had done so (we were Southern Baptists), she told me, as only “Nana” could say, “Boy, don’t you ever go refusing anybody preaching Christ!”