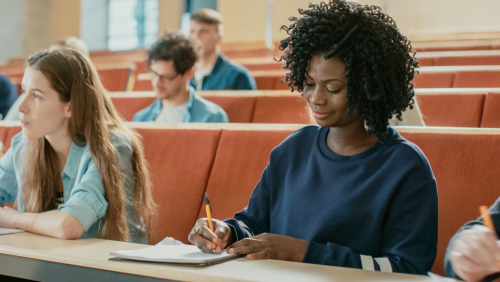 “The Gospel Isn’t a One-Size-Fits-All Exercise”: What 1 Woman Learned By Being Part of BYU’s 1% Black Population

Alixa Brobbey was born and raised in the Netherlands. She lived in Ghana for two years before traveling to study English at Brigham Young University, Provo, Utah. She’s grateful for her goodly parents and loving younger sisters, the gospel, and the opportunity to call three different countries home. Her mother is Alice Brobbey, whose essay also appears in A Place to Belong.

Once, when I was a little girl growing up in the Netherlands, a man from South Africa visited our branch and stood up to share his testimony. I can’t remember many specific things I heard at the pulpit in that little red-brick building, but I do recall that as this man was speaking, he remarked on how interesting it was to see white and black members of the Church worshipping together in the same room. I can recall that the congregation seemed to simultaneously hold their breath and try to inconspicuously glance back at my family to see how we handled his comment. Now, as an adult, I understand that this aspect of his testimony had more to do with the effects of apartheid than with anything concerning the doctrine of The Church of Jesus Christ of Latter-day Saints. But as a child, all I felt was a stinging, hot sensation on my cheeks. We were the only Black family in our congregation, and that day I wondered if we were so different, we should leave and find somewhere else to practice our religion.

As I continued to age and progress in the Church, I had several more experiences in which someone else’s personal culture, history, or views made me question whether or not a church whose stereotypical leaders are older, white, American, conservative males had a place for me. During an activity for Young Women, shortly after United States president Barack Obama was reelected, one of my American Young Women leaders in the Netherlands unexpectedly vented to us girls about how upset she was. She claimed that the results showed that America’s values were eroding. She warned us about the times we were living in and alluded to a personal belief that her nation’s new leader was an anti-Christ. I was confused. I mused at her inappropriately sharing personal opinions in such a setting. Those expressions had nothing to do with the true gospel. My parents, both active Church members, had celebrated Obama’s victory as a sign of progress. We were excited that the so-called leader of the free world looked like us. At thirteen years old, I had not yet developed my political opinions, and listening to my leader’s tirade made me wonder if I could have liberal views and still be considered a good Latter-day Saint.

During seminary class a few years later, my teacher complained that diversity quotas were making it difficult for people like him in the job market. He told us that no matter how qualified white men like him were, they now always lost jobs and promotions to ethnic minorities and women. This was not presented as a topic for debate or discussion. He presented it simply as somebody with more experience telling the younger generation facts about life. Once again, an issue that had little to do with doctrine was discussed in a church setting and caused me great discomfort. Listening to him speak, I disagreed strongly with his argument but did not know how to raise my hand and challenge a priesthood holder during a Church-sponsored meeting. I tried to ignore his words and focus on the message of his lesson, but all these years later I cannot recall what scriptural message he taught us that day. I do recall, however, how alone I felt when nobody challenged him. And I wondered whether, in a class of about eight, he even registered that I was there. Surely, he would not have said such things if he’d remembered I was in the room?

Despite these events, I tried to focus on the essence of the gospel. That helped me to continue to attend church despite negative experiences, which were the deviation rather than the norm. I was blessed with many leaders and teachers who greatly strengthened my testimony and helped me to learn. My parents taught me that I go to church because of what I believe, not because of who is there. Their counsel was a great blessing when things were difficult. I continued studying the scriptures daily, I went to Mutual activities and completed my Personal Progress program, and even when it was early and dark and I didn’t feel like going, I hopped on my bike and rode to seminary. I began to learn the importance of separating the doctrine of the Church from aspects of its culture.

During this time, I grew to love reading the New Era. When I was growing up, I always dreamt about being a writer, and so as soon as I found out how to, I worked on composing and submitting a piece for the monthly Church magazine for teens. When my piece was chosen for publication, the editors asked me for a photo. I sent them one of me, with my brown eyes and black hair braided in cornrows. When the story was finally published, the accompanying illustration was one of a girl with blonde hair and blue eyes. I tell that story to my friends now, laughing about how different I look in the magazine compared to in real life. Despite seeing the funny side, however, I realize that this story shows that even though there are many Latter-day Saints all over the world, many of us feel like we have to strive for some sort of successful Utah Mormon Mom Blogger ideal.

Ironically, it was the place I least expected that helped me come to terms with the fact that I don’t necessarily look, think, speak, or act like other Church members. Throughout my first years of high school, I resented the thought of attending Brigham Young University. The thought of being surrounded by people who shared some of the same biases, assumptions, and sometimes demeaning cultural beliefs I’d experienced as a child seemed a little nauseating. However, during my junior year, moving to Ghana gave me the chance to develop my personal relationship with my Savior. I began to look at BYU’s positive aspects and discovered that there was a lot about the university to like. While working with me on my college applications, my guidance counselor looked up statistics on BYU and asked me if I really wanted to move to a place where only 1 percent of the student body shared my ethnicity. When I told her that I’d grown up around mostly white people in Europe, she warned me that white Americans were very different. Though I was still hesitant, I prayerfully determined that going to school in Provo, Utah, would be the best choice for me at that time. Attending BYU turned out to be a wonderful blessing.

Although I’ve had moments in which people were insensitive, naïvely unkind, or even openly hostile, it was there I discovered that unlike what I had thought growing up, there are a myriad of ways to be a Latter-day Saint. Within the culture of Christ, there are so many ways to be a woman of God. My friends, roommates, mentors, and strangers have shown me that living the gospel isn’t a one-size-fits-all exercise. My friend who registered as a Democrat as soon as she turned eighteen showed me this. My roommate who identifies as asexual and opened up to me about trying to reconcile this with a desire for a temple marriage showed me this. My professor who chose not to take her husband’s last name and taught full-time while raising young children showed me this. My resident assistant (RA) with her pixie cut and cat sweaters, my roommate who worried that eating disorders would prevent her from being a good missionary, and my coworkers who are well into their twenties but have never had boyfriends all show me this. By the way women around me continue to live the gospel faithfully, despite their trials and differences, I gain the courage to continue to come to church and to Jesus Christ as I am.

Recently, I went to an event sponsored by the BYU Black Alumni Society. While getting to know each other and sharing our experiences, we ended up discussing the lack of representation we sometimes feel. Rhonda Peck, BYU Law Student Bar Association president, encouraged us to see her as a mentor. She said that she was initially skeptical about attending a school where few people were multiracial like her. She shared with us an observation she had made at a student luncheon when she asked the professor next to her, “Where is the diversity in this room?” Providentially, he invited her to “come, and help us make it better.”

I think we can take a similar approach with our fellow members in the Church. The people within it are not perfect. Sometimes it feels easier to give up and stay away than to attend meetings and activities in which we may feel that our voices are not heard. I’ve learned, though, that things cannot get better unless we are in the room sharing our ideas and advocating for ourselves and others like us. Let us continue to share our light, our stories, our pains and triumphs so that others may be comforted by them as they strive to find their place within the Church. Rather than turning away, may we all have the strength to stay and help those around us become more loving, open, and welcoming while we journey to become more like the Savior.

A Place to Belong is filled with distinctive stories written by thirty-three modern women of faith who show from their own lives that there's more than one way to be a believing and contributing woman in The Church of Jesus Christ of Latter-day Saints. This collection celebrates the diverse lives that women lead and how they navigate their twin commitments to women's issues and to their faith. Available now at Deseret Book stores and at DeseretBook.com.