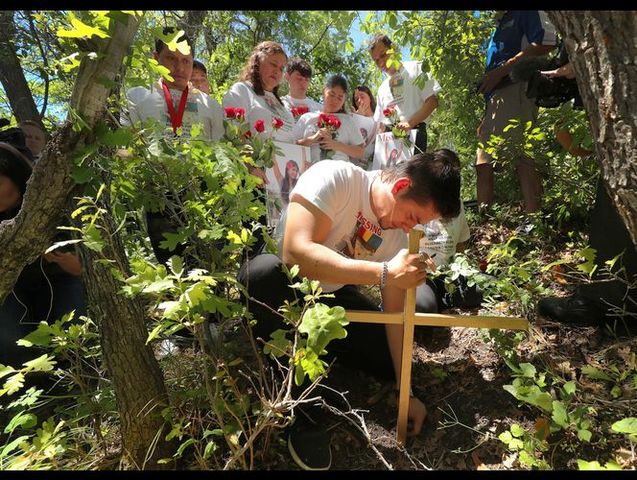 "We Need Earthly Justice": Family of Slain RM Visit Canyon Where Her Body Was Found

The family of Elizabeth Elena Laguna Salgado gathered in Hobble Creek Canyon to visit the site where the returned missionary's remains were found earlier this year and to mourn her death, which police are investigating as a homicide. "I feel they're [the police are] going to be able to find the monster of monsters that did this," Salgado's uncle Rosemberg Salgado said. "We want to avoid that it will happen to another girl."

Parents, siblings, and relatives of Elizabeth Elena Laguna Salgado wore white T-shirts with the 26-year-old's portrait as they gathered about thirty paces from the road in Springville's Hobble Creek Canyon.

"I feel terribly desperate with this situation, to have found my daughter's body was brought here so far away," her mother, Libertad Edith Salgado Figueroa, said in Spanish through a translator. "Someone did this to her and we need to find the person who did this to her. We need earthly justice for someone that took the life of an angel, of a princess, of a warrior."

Police are calling the case a homicide, but have not yet determined the cause of Salgado's death. The English student from Mexico had been missing for three years before her body was discovered by chance.

Mormon Life Rm DeathRm,Death,Mormon Life
Comments and feedback can be sent to feedback@ldsliving.com