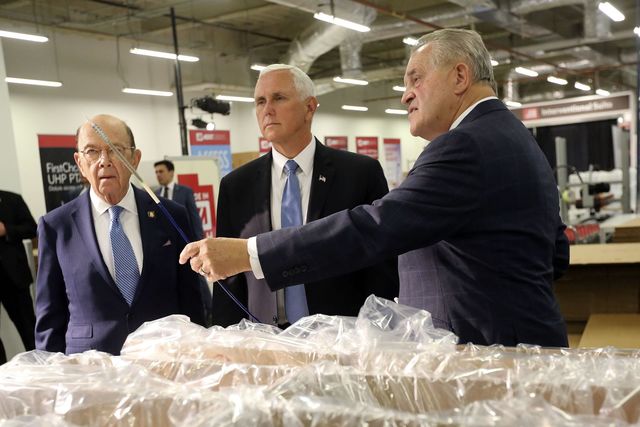 "We Told Him We'd Pray for Him": What Church Leaders Said During Their Meeting with Vice President Pence

Religious freedom and the crisis in Venezuela were among issues Vice President Mike Pence and leaders of The Church of Jesus Christ of Latter-day Saints discussed in a brief meeting Thursday morning in Salt Lake City.

“We talked about the importance of religious freedom, the reality that those of faith are given the right to believe and to say and and to speak in the marketplace or the public square,” said President M. Russell Ballard, acting president of the church’s Quorum of the Twelve Apostles.

Pence was “very much” in favor of people being able to keep those freedoms, regardless of what their faith might be, he said.

President Ballard, Elder Ronald A. Rasband, a member of the Quorum of the Twelve Apostles, and Elder Jack N. Gerard, a General Authority Seventy, met with Pence for about 20 minutes at the Grand America Hotel in downtown Salt Lake City before the vice president left to deliver a speech a new trade agreement at Merit Medical in South Jordan.

“We told him we’d pray for him, and he seemed to appreciate that,” President Ballard said. “We hope he’s praying for us, too.”